Meet the newly elected officers of the Order of the Arrow! 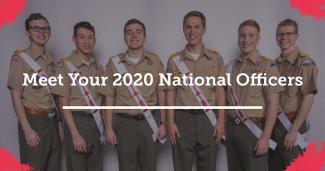 “I'm excited to build on the momentum we created this year to improve lodge performance and initiate long-term change for our organization. Between NOAC, Section ACT Conferences, and every event in between, I can't wait to meet Arrowmen from all over and make our brotherhood stronger than ever before.”

Hailing from Reston, Virginia, Zachary is a Vigil Honor member and a Founder’s Award recipient from Amangamek-Wipit Lodge. He is a former Section NE-6A chief and served as the Northeast Region NLS Chief of Staff. With goals of becoming a journalist later in life, Zachary studies political communication at George Washington University. When Zachary is not busy being an editor for the student newspaper, he likes to travel and visit national parks. Congratulations, Zachary!

“The 2020 National Conference Committee has been laying the foundation for this past year. I’m excited to see all of the future generations of Arrowmen all across the nation!”

Noah is a Vigil Honor member from Brookland, Arkansas. After serving as the Quapaw lodge chief, Noah served for two terms as the Section SR-8 chief. He has earned the rank of Eagle Scout, as well as the Founder’s Award. Noah intends to major in business management at the University of Central Arkansas. During his leisure time, Noah enjoys playing soccer and partaking in high adventure opportunities. Congratulations, Noah!

“Very excited to help plan NOAC, NLS, and support our lodges and sections throughout the Central Region.”

Hailing from Mundelein, Illinois, Patrick is a Vigil Honor member from Ma-Ka-Ja-Wan Lodge #40 of the Northeast Illinois Council. He previously served as the Section C-7 chief, and has also served as a section secretary and chairman for various committees. Patrick has received both the Founder’s Award and the James E. West Award. Patrick is majoring in mechanical engineering at Illinois Institute of Technology. He also enjoys participating on his local swim and dive team. Congratulations, Patrick!

“Excited to see what the year will offer while serving as the Southern Region Chief and to build relationships with all Lodge and Section Officers in the Region.”

Seth hails from Chesapeake, Virginia and is a Vigil Honor member of Blue Heron Lodge of the Tidewater Council. He is a recipient of both the Founder’s Award and the James E. West Award. Seth most recently served as the Section SR-7A chief. He is an information systems technology major at Tidewater Community College and plans to transfer later on to a four-year school. He currently serves as a Senator in his Student Government Association and enjoys spending time with friends. Congratulations, Seth!

“I am looking forward to leveraging the first ACT Conferences and the 2020 National Order of the Arrow Conference to continue building high performing lodges.”

Conor is from Hingham, Massachusetts and is a Vigil Honor member of Tantamous Lodge of Mayflower Council. On top of recently serving as the Section NE-1 chief, he has also had time to attend both the 2017 jamboree as well as the 2018 NOAC. Conor currently attends Stonehill College as a communications major. He plans to serve as a brand identity strategist for nonprofit organizations. To pass the time, Conor enjoys camping and pursuing his hobby of graphic design. Congratulations, Conor!

“I am incredibly excited for 2020. This opportunity to capitalize on the momentum gained from the Focus 19 movement is unique and must not be squandered.”

Gavin is from Burbank, California and is a Vigil Honor member from Spe-Le-Yai Lodge. Gavin has served as both the section secretary and as the section chief for Section W-4N. Gavin is currently majoring in public policy at the University of California, Riverside. Gavin hopes to one day have a career serving as a campaign manager. On top of Gavin’s commitments in Scouting, he serves as a Campus Coordinator at his school. Congratulations, Gavin!