Meet the Order of the Arrow's 2017 national officers, elected at the 2016 National Planning Meeting in Dallas, TX. 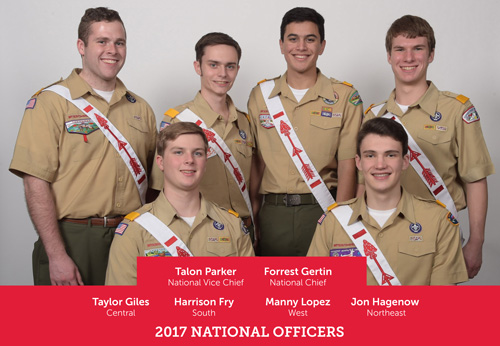 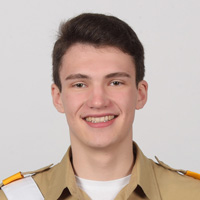 “This year presents our organization with the incredible opportunity to Fuel Scouting’s Adventure - both by providing Operation Arrow staff and Jamboree participants with an excellent experience, and by providing our lodges with the resources they need to succeed through the LLD rewrite.”

Forrest hails from the city of Rochester, NY. He is an Eagle Scout and Vigil Honor member of Tschipey Achtu Lodge and is an assistant Scoutmaster for Troop 750 in the Seneca Waterways Council. Previously, Forrest served as section chief for NE-3A and is a recipient of the Founder’s Award from his lodge. Forrest is an international political economy major at Georgetown University. He participates in student government, theatre and debate, and enjoys playing percussion and cycling - and has even biked around one of the great lakes. 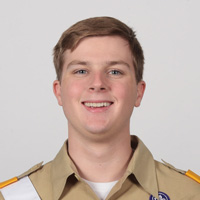 “Planning and executing Operation Arrow will be a challenge, but I know we are ready to take this challenge head on!”

Talon’s hometown is Elm City, NC, and is an Eagle Scout and Vigil Honor member of Croatan Lodge and serves as an assistant Scoutmaster for Troop 752 in the East Carolina Council. Talon was previously the section chief of SR-7B. Talon studies nursing at Nash Community College. In his spare time, he enjoys boating, hunting, backpacking and fishing. This past summer, he was a foreman for the OA Ocean Adventure program at the Florida Sea Base. 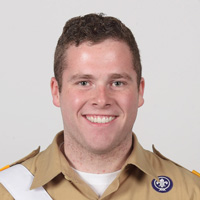 “I’m excited the serve my fellow Arrowmen and put together a great experience at the national jamboree and our other national programs this year.”

Taylor is from Charleston, WV, and is an Eagle Scout and Vigil Honor member of Takhonek Lodge and is an assistant Scoutmaster with Troop 5 of the Buckskin Council. Taylor was previously the chief of C-4B and is a recipient of the Founder’s Award. Taylor studies political science and economics at West Virginia University. In his spare time he golfs, skis, goes white water rafting, and goes hiking. He is also the first national officer from his lodge. 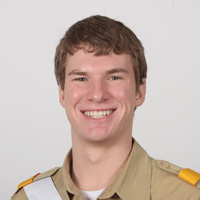 “I’m looking forward to a great year through supporting Operation Arrow, the Lodge Leadership Development rewrite and most importantly the Arrowmen of the Northeast Region!”

Jon resides in Suffield, CT, and is an Eagle Scout and Vigil Honor member of Tschitani Lodge and is an assistant Scoutmaster of Troop 66 of the Connecticut Rivers Council. Jon was previously the section chief for NE-2A and is a recipient of the Founder’s Award and his lodges Silver Lodge Flap recognition. In his spare time, Jon enjoys swimming, skiing, paintball and spending time outdoors with friends. Jon is a huge theater fan and has been behind the scenes for The Lion King on Broadway. 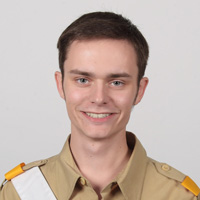 “I’m very excited to represent the Arrowmen of the Southern Region in the next year. We will engage Arrowmen like never before at the jamboree.”

Harrison is from South Fulton, TN, and is an Eagle Scout and Vigil Honor member of the Nguttitehen Lodge and is an assistant Scoutmaster with Troop 43 of the Lincoln Heritage Council. Harrison was previously the section chief of SR-6 and is a recipient of the Founder’s Award, James E. West Fellowship, and Arrowman of the Year from his lodge. Harrison majors in management at Murray State University. In his spare time, he enjoys playing and writing music, carpentry projects and camping. He has travelled to six countries and is very active in his church and on campus. 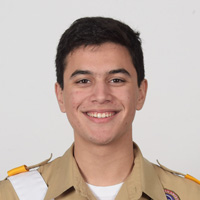 “2017 is going to be a great year for the region and the Order as we move to inspire, involve and empower our fellow Arrowmen.”

Manué’s hometown is Aliso Viejo, CA, and is an Eagle Scout and Vigil Honor member of Wiatava Lodge and is an assistant Scoutmaster with Troop 774 of the Orange County Council. Manny was previously the section chief of W-4S and is a James E. West Fellow and a recipient of the Arrowman of the Year award from his lodge. Manny studies political science at Irvine Valley College. In his spare time, he enjoys cooking, singing, poetry and participating in the Model United Nations club. Manny is a huge Disney fan and has conducted choirs in concerts.