The OA has provided service at Boy Scout National Jamborees since the second event in 1950 at Valley Forge, Pennsylvania. For most of the early Jamborees, that service consisted of OA Service Troops, made up of youth Arrowmen and led by selected adults. However, recent years have seen the role of the OA at the Jamboree grow into an integral part of the BSA’s largest gathering.

In 1937, participation by the OA was limited to a few things done to promote an 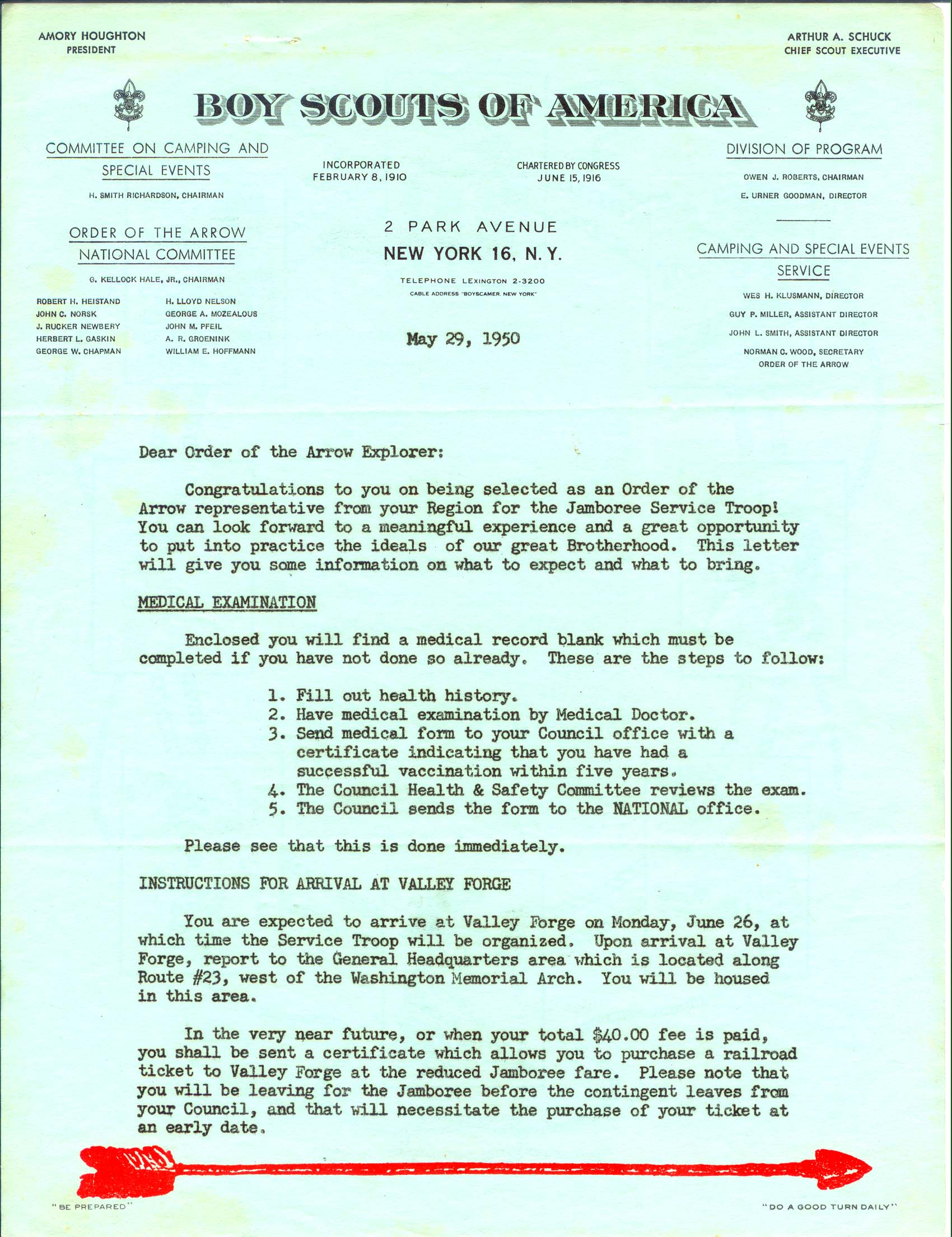 d spread the word about the OA. The 1950 Jamboree marked the introduction of an OA Service Troop with 36 Arrowmen chosen to serve. Duties included behind the scenes items ranging from delivering mail to the troops to guarding dangerous locations. A Service Troop of 18 Arrowmen supported the 1953 Jamboree and a special fellowship assembly was held just for Arrowmen and in 1960, support expanded to two Service Troops.

In 1964, the Jamboree returned to Valley Forge, and from then on the role of the OA at the Jamboree has steadily grown. Participation by the OA had grown to approximately 200 Arrowmen. An OA Pow Wow was introduced that was attended by some 15,000 Arrowmen, and included remarks from both founder Urner Goodman and Chief Scout Executive Joseph A. Brunton to launch the OA’s 50th Anniversary celebration that would be concluded at the 1965 NOAC. In 1967, the OA also supported the first BSA hosted World Jamboree by providing service.

In 1973, a total of ten Service Troops were provided to support the two-location Jamboree; and a Jamboree Youth Advisory Committee for the first time was created from OA members.

In 1977, the Jamboree was held north of Pittsburgh, Pennsylvania, at Moraine 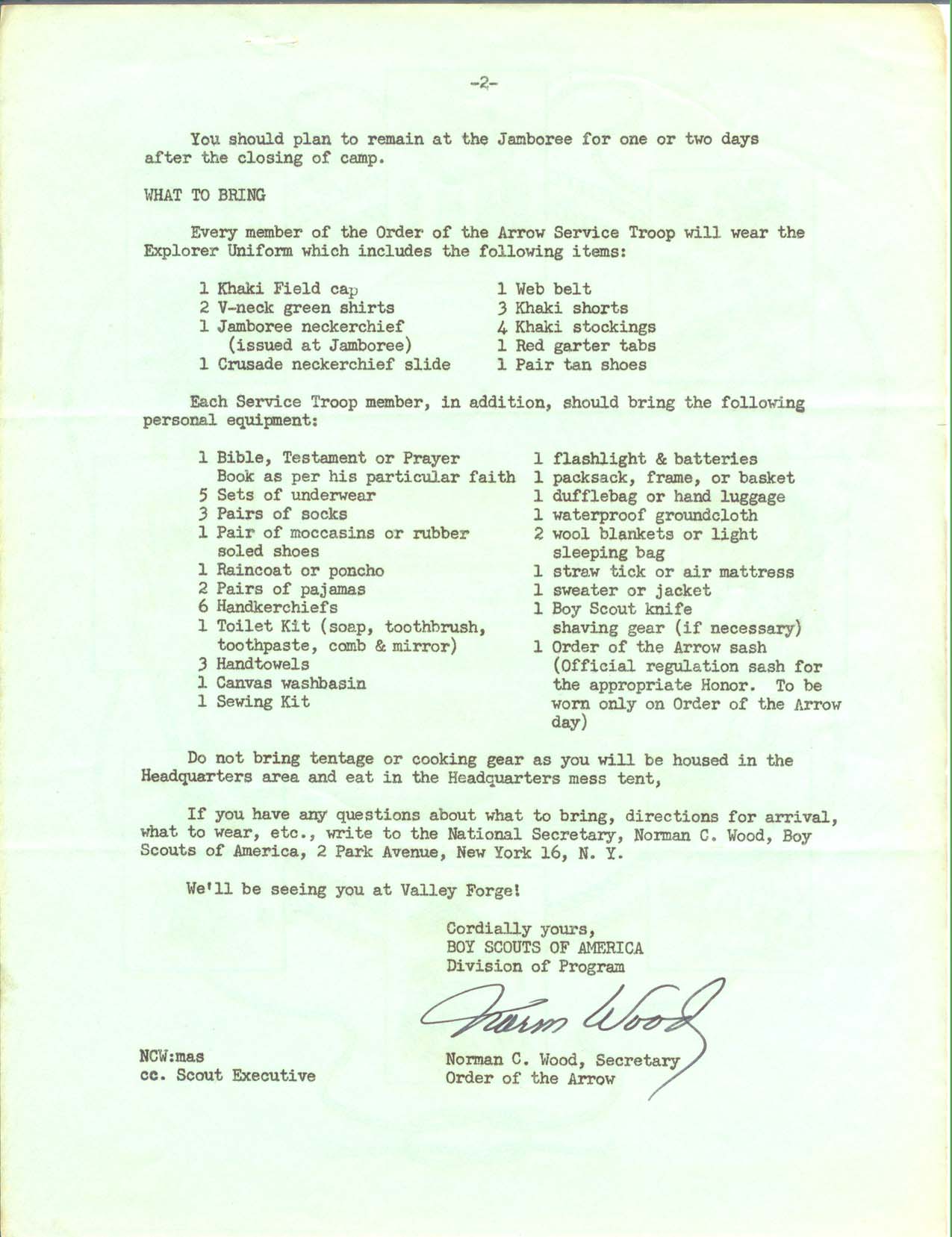 State Park. It was at this event that the OA first expanded its role at the Jamboree of handling functions other than an OA Service Corps. The corps itself was comprised of more than 100 Arrowmen. OA Vice Chairman Carl Marchetti and Executive Secretary Bill Downs were asked to supervise a youth staff subcamp for the Jamboree. In this new organization, the Order would be responsible for oversight of not only the service corps, but also all youth staff (aged 16 to 20) at the Jamboree. No matter what their program assignment was on site, they would be housed, fed, and provided transportation, recreation, and other services by an OA-led team. This increased the impact of the Order across the entire Jamboree, as there was 600 to 800 youth staff members at the time. The OA also, this year, presented an exhibit in the National Exhibits area showcasing the Order.

The 1989 National Scout Jamboree saw a significant increase in OA involvement at the Jamboree when several new activities were added to the mix. A five-troop OA service corps (139 Arrowmen) provided invaluable service at the Jamboree, plus an on-site radio station, WBSA, conceived by Mark Chilutti and Angelo Cappelli. For the first time, the Order set up a Native American Indian Village with 45 youth and adults providing a busy program of crafts, skills, and dancing. Finally, the OA conducted a rendezvous in the main arena with over 10,000 Arrowmen in attendance.

In 1993, the OA continued its expanded service to the Jamboree, again held at Fort A.P. Hill, Virginia. The Native American Indian Village returned with an expanded program, including culture, crafts, and dancing. Jamboree participants completed more than 175 Indian Lore merit badges. The OA once more took on the oversight of all youth staff, providing them with food, housing, Scoutmasters, transportation, and recreation. A new event—the “model campsite,” which demonstrated proper backcountry camping techniques—was led by the Order. The OA show (pow wow) proved to be a huge success with approximately 15,000 Arrowmen attending.

The OA once again expanded its support as the Jamboree returned to Virginia in 1997. With the Service Corps becoming an ingrained component of the event, and the OA Indian Village established as well, two new areas were added: The Outdoor Skills Place (or TOAP), and a new big hit called Odyssey of the Law, an interactive show and video presentation that challenged Scouts to rely on the Scout Oath and Scout Law when making decisions in their lives. The Odyssey of the Law show was one of the most popular attractions at the Jamboree and was attended by 20,000 Scouts and Arrowmen.

In 2001, the OA again made significant contributions to the National Scout Jamboree. Scouts continued to visit the OA Indian Village to learn about dancing and crafts and to try some authentic American Indian food. The big show in 2001 was called Scoutopia. After the success of Odyssey of the Law, which was funded by the OA, the BSA’s Jamboree leadership built the cost of Scoutopia into the budget, along with strong support from the U.S. Marine Corps.

By the time 2005 rolled around, the OA was very active throughout the Jamboree. TOAP continued with great success and registered its largest turnout since it was started and Twelve Cubed, an interactive show run by the OA, was another huge success offering an air-conditioned indoors experience to tens of thousands of Jamboree goers.

And at the 2010 National Scout Jamboree and celebration of the 100th Anniversary of the BSA, the OA once again was an integral component, preserving its rich tradition of serving others while providing an invaluable experience to all who attended. A total of over 600 Arrowmen served in a variety of capacities. PACEsetters (Personal Accountability and Commitment to Excellence) was a new addition to the Jamboree and the “show” in 2010 was called the Mysterium Compass, which presented five different acts of the “your life is like a compass” experience. Scout’s started their Mysterium Compass experience by entering a “Vault” that included a spectacular display of historical Scouting and OA memorabilia.