In the spring 1950 issue of the National Bulletin, Arrowmen were told that members of the National OA Committee would be available to meet with them at the 1950 NOAC. It was stated that they would be accessible to help members better understand the Order and its policies. Members were also told,

you’ll recognize these men because they will be wearing a special Vigil Honor band on which the colors will be reversed. These bands were made specifically for our Committee so that lodge members could recognize these officials and seek their help. 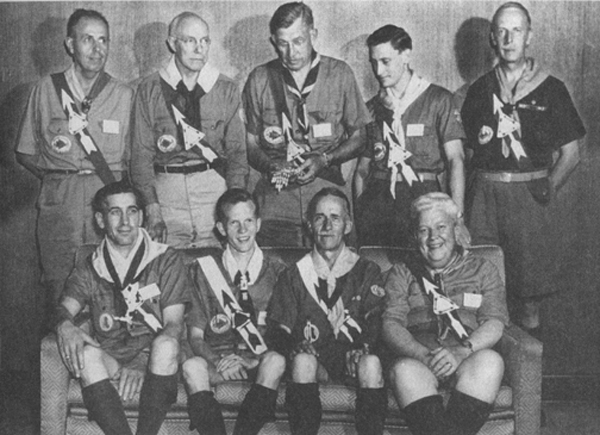 The sash was a proactive response to the 1948 NOAC.

Many Arrowmen were confused about what it meant to be fully absorbed into the BSA. They were only beginning to see the benefits of youth taking leadership roles. The reality was that the OA was more run by volunteer people than professionals than ever before. By making themselves conspicuous and available with their reverse color sashes the National OA Committee was able to allay fears and largely put the issue of the integration of the OA into BSA behind them.

During the red National OA Committee sashes tenure as few as 15 of them, including one for E. Urner Goodman,  were issued. Circa 1954 they were considered no longer needed and were retired.