Since its earliest beginnings, the Order of the Arrow (OA) has enjoyed an almost spiritual relationship with the histories and traditions of Native American peoples. This kindred spirit is evident in the OA’s ceremonies, its symbols, and even in its name. By borrowing so much in the way of culture and crafts from the American Indian, the Order has accepted an obligation to maintain the highest standards of authenticity. Yet, with all of the interaction between the OA and that of Native Americans, there were those individuals who recognized a need for an informative program that furthered the understanding and awareness of the American Indian culture. This need gave rise to a pilot program known as the ‘National Indian Seminar’. 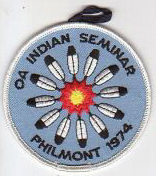 The program was originally designed to provide maximum support to the Order of the Arrow’s nationwide emphasis on Indian culture and crafts. It concentrated on “Telling It Like It Is” in discussions of the Indian way of life. The program developed in part from concerns surrounding what many lodges were doing in the way of “Indian Dancing”. Some was so bad that it was viewed as offensive and insensitive. It is important to note that this was occurring soon after the Civil Rights Movement and other big social upheavals of the 1960s. The two most prominent social movements in the early 1970s were that of women’s rights and Native American rights. Knowledgeable observers worried that if the Order of the Arrow did not do a better job of making Indian-oriented activities and events more accurate and respectful, they could run the risk of being forced to abandon them. With the backing of the National OA Committee, the first National Indian Seminar quickly went from concept to reality.

The first National Indian Seminar was held at Philmont S 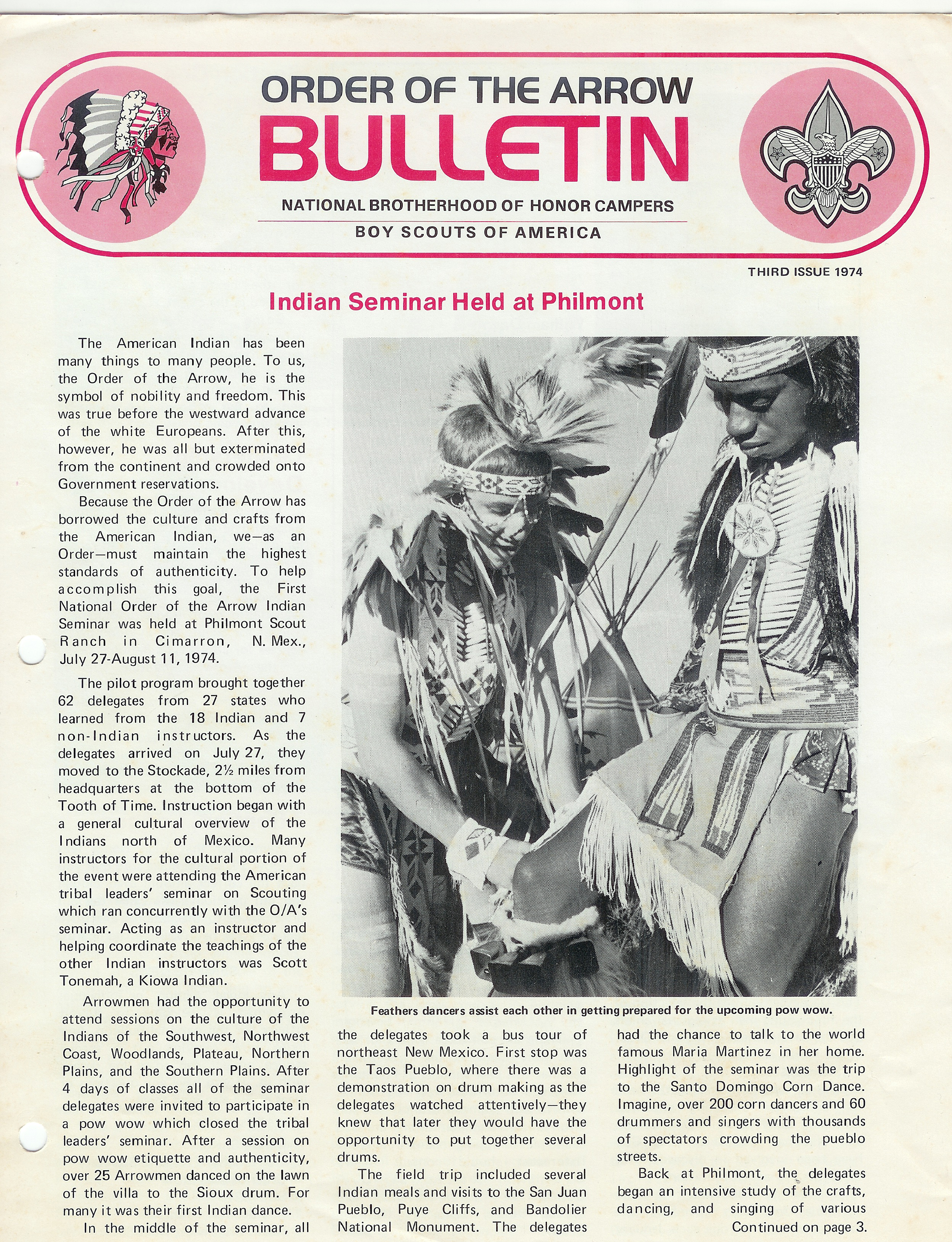 cout Ranch near Cimarron, New Mexico from July 27 – August 11, 1974. Each OA section in the nation could select one youth delegate to represent them at the two-week training program. Ultimately 62 delegates from 27 states attended the Seminar. The site of the seminar was chosen for numerous reasons, but primarily because northern New Mexico had one of the richest concentrations of Native American people and communities in the country. Since Philmont Scout Ranch also happened to be located in this area, it was a natural fit. Additionally, over the years, the Order of the Arrow had developed extensive Native American contacts throughout this area.

Numerous individuals were actively involved in the program’s development, but the driving force behind it all was longtime National OA Committee member and Distinguished Service Award (DSA) recipient, Maury Clancy. Maury was aided considerably with initiation of the program by his wife Harriet, as well as others. Some of the more prominent contributors to the program were Arrowmen Harris Tanner, John Cook, Bernie Drock, and George Feil (Chairman, National OA Committee).

The seminar had 18 Indian and seven non-Indian instructors from various parts of the country participating throughout the event. Most notable of which were Scott and Doris Tonemah, an older Indian couple from Norman, Oklahoma. In addition to 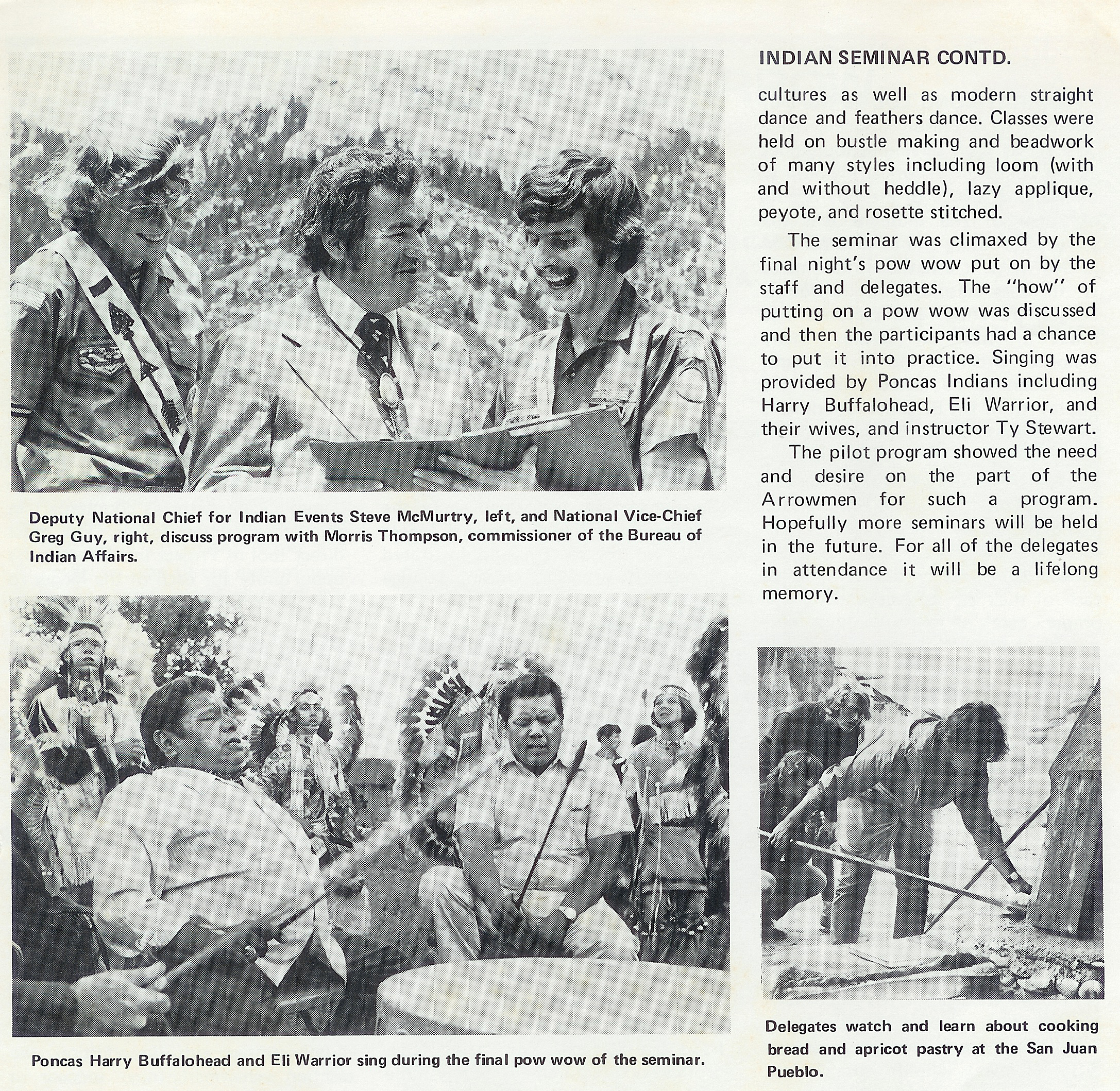 being instructors, Scott and Doris coordinated the teaching of the other instructors in order to provide cultural continuity. Other key instructors were Harry Buffalohead and Eli Warrior (both Poncas Indians), as well as Ty Stewart, Steve Shawley, and Bill Walker. Youth Arrowmen were also heavily involved in the program’s development, and the key youth leaders were Steve McMurtry and Greg Guy. Steve was the deputy national chief of Indian Events, and Greg was the national vice chief. These two extremely capable Arrowmen became the ‘go to’ guys for Maury Clancy and the other organizers of the event.

The seminar’s schedule of events was organized into three main phases. The first phase of the program, which lasted between four and five days, concentrated on Native American history, culture, and ethnology. This phase covered the Eastern Woodlands, Northern Plains, Southern Plains, Southwestern, and Pacific Coastal cultural areas. The second programmatic phase involved a three-day field trip to various sites in New Mexico, which included places like the pueblos of Taos, San Juan, Santa Clara, San Ildefonso, and Santo Domingo, which culminated in the annual Corn Dance Festival held there. In addition, archaeological sites such as Bandelier National Monument and the Puye Cliffs were visited. The third phase of the program, which lasted about five days, 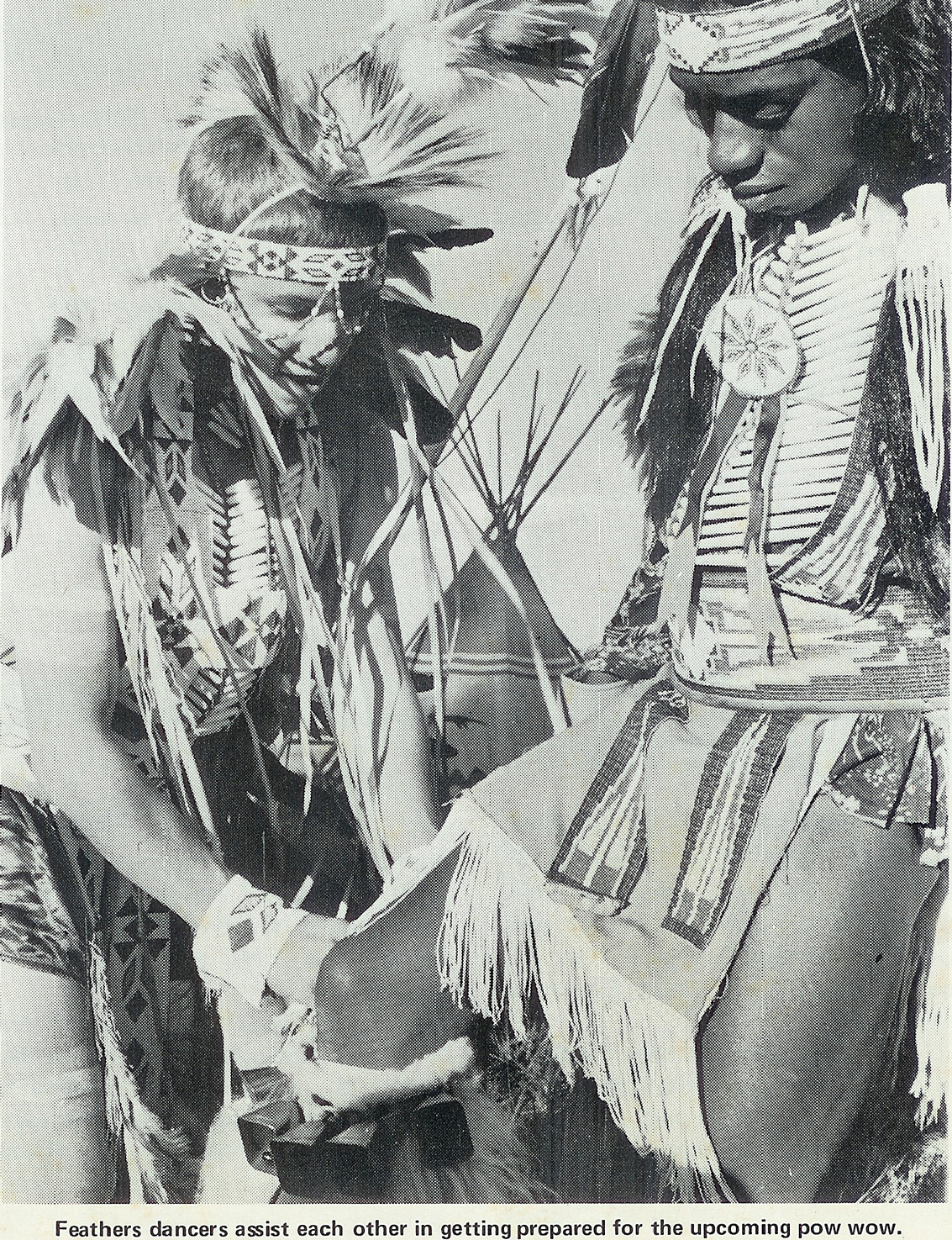 was all about Indian crafts, art, costuming, and dancing. This phase emphasized the nature of beadwork, feather work, ceremonial and dancing attire, Indian music, and how to start a dance team. Throughout the two-week program, there were also occasional classes on such topics as Indian foods, games, specialized dancing, and the world of the modern-day Indian. The delegates also managed to spend an afternoon hiking up the Tooth of Time. The seminar was climaxed by the final night’s powwow put on by the staff and delegates.

As the first National Indian Seminar came to a close, and the delegates returned home to their respective sections, lodges, and chapters, they each took with them a new found respect and reverence for the American Indian, which they eagerly passed on to their fellow Arrowmen. Sadly, Maury Clancy passed away later that same year. As a result of the success of this first event the National OA Committee authorized five more National Indian Seminars over the next ten years.