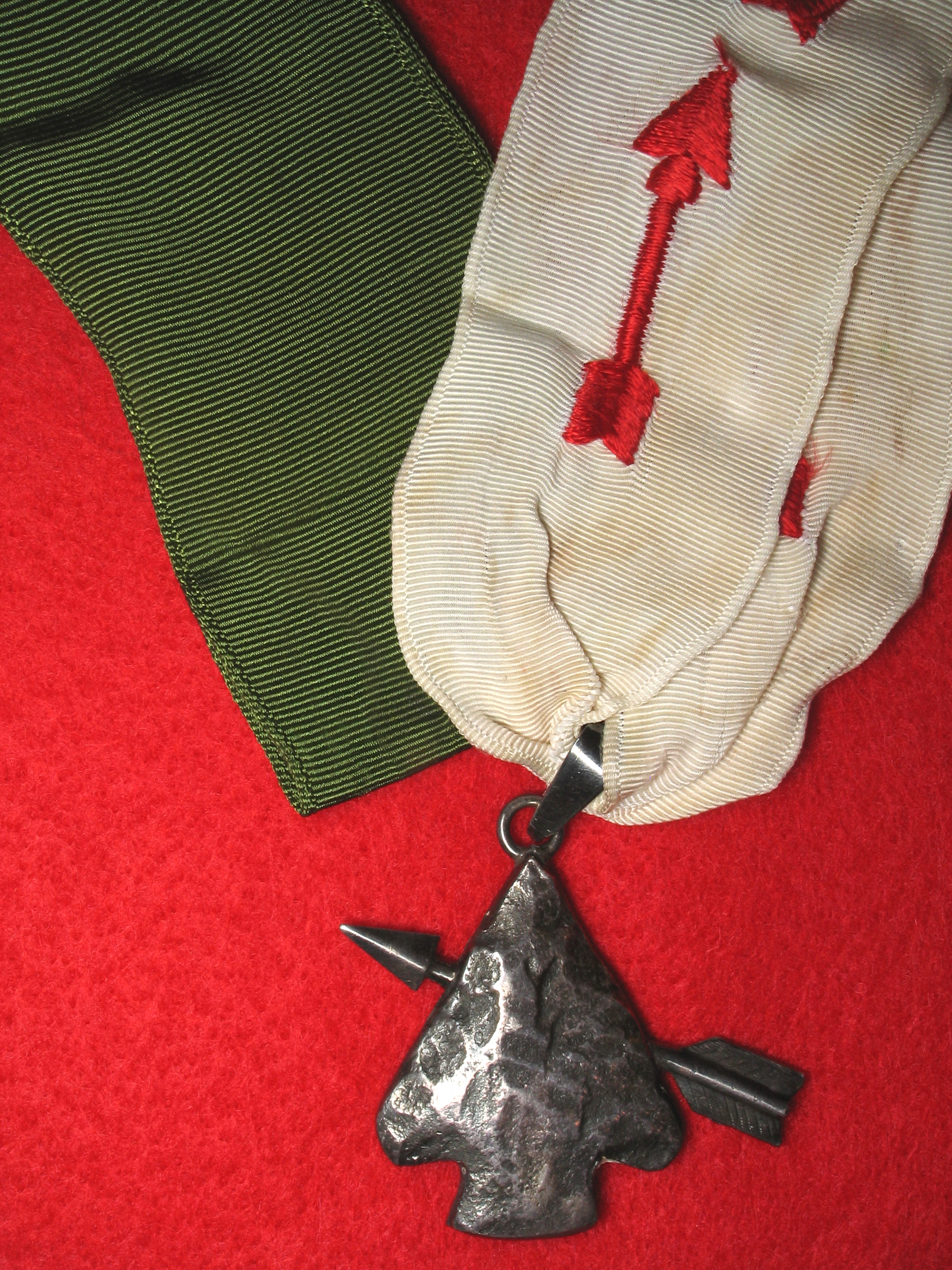 The first recipients were recognized at the 1940 national meeting at Camp Twin Echo Pennsylvania in celebration of the 25th anniversary of the Order. E. Urner Goodman, Carroll A. Edson and nine others were the first recipients. Chief Scout Executive James E. West was one of the first recipients but did not receive the award until December 29, 1942, presented at the 28th annual meeting of Unami Lodge. Ten of the original 11 were current or former professional Scouters, the lone exception being H. Lloyd Nelson.

The award is a sterling silver arrowhead, bearing an arrow pointing upward and to the wearer’s right. Originally the ribbon was dark green to “to remind us of the great outdoors in which the program was centered.”

Between 1942, 1946, 1948, and 1950, the national lodge posed a tight limit on the number of awards with only three to six presentations for certain years. At this time in our history as a national organization, the award was rare.

During the December 1960 National OA Committee meeting at Indiana University, members discussed and agreed to change the color of the DSA ribbon from its forest green to explore a new color combination. The last awards presented with the forest green ribbon were at the 1965 National OA Conference (NOAC), which at that time there were only 111 recipients.

In 1966, during a National OA Committee meeting in Dallas, Awards Chairman Kellock Hale reported, “that at last the new ribbon was available.” The new design was a white ribbon with four embroidered red arrows on each side. The National OA Committee mailed all former recipients with the green ribbon the “new” replacement ribbon. The Class of 1967 was the first recipients to receive the new ribbon during their presentation.

The DSA is traditionally part of the pageantry at NOAC. During the early years through the mid-1970s new recipients were not announced until the show, which was a mystery to even the new awardees. In later years a formal announcement has been made beforehand and a formal letter was mailed.

Professional and adult Scouters received most of the awards in the formative years. Youth area chiefs, the forerunner title to a current section chief, were invited to help plan the 1948 National OA Conference. This opportunity allowed more youth to get involved nationally and to help plan their local area conferences, which became known as conclaves nationwide. The first youth recipients did not occur until the mid-1950s. National officers and national conference vice chiefs were elected at the planning meeting, which at the time was every two years to plan the upcoming NOAC. Participation for youth to help plan a national event is a unique and special opportunity, and afforded more youth leadership responsibility.

In the modern era of Scouting there is more opportunity for both youth and adult to serve on various levels: NOAC staff, National Jamboree, NLS, and the high adventure programs.

Gradually more DSA presentations were awarded, as there were more opportunities to serve in the increasingly diversified OA national programs. Between 1981 and 2012, there have been groups of DSA recipients presented at a NOAC ranging in size from 39 to 69, and a total of 908 awards have been presented in history. The total number may sound high, however, one has to consider the total BSA membership of over 800,000 and the national OA membership of over 171,000.

A special newsletter for recipients was started in the fall of 2008 called "The Silver Arrowhead". One goal of the newsletter is to reach out to former recipients, as many are not active in Scouting. Another goal is to share narratives about early recipients to share their story.