The 1977 National Scout Jamboree was held at Moraine State Park, Pennsylvania, from August 3 to 9 with the theme “Forward Together”. 28,601 Scouts participated in the Jamboree. 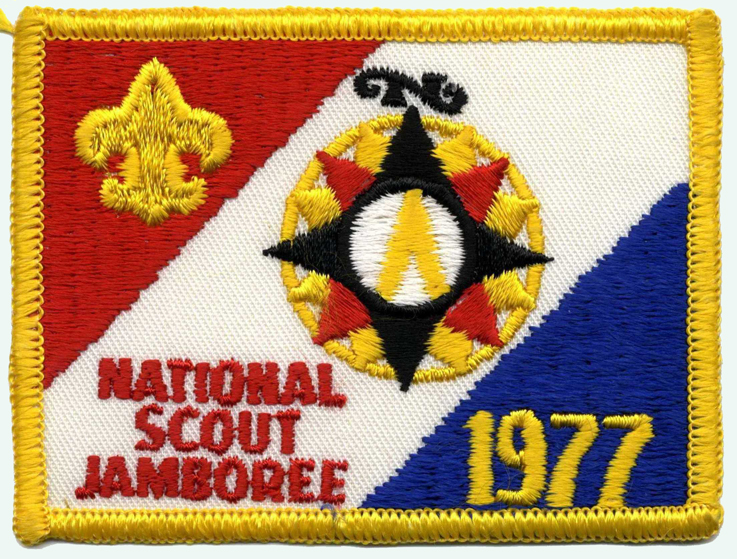 Special appearances were made by the current Miss Teenage America, Country singer Dottie West, Olympics decathlon champ Bruce Jenner and the highlight of the closing show was entertainment provided by Lone Scout Burl Ives by his singing a medley of his hit songs. Another highlight was the re-creation of the Brownsea Island encampment where twenty-one Scouts and two leaders played the games and practiced the skills from 1907 in period clothing as worn by the world’s first Scouts. To reflect the sign of the times and the National effort to convert to the metric system, all troops were given a special “Scout Metric Measuring Kit”. 4½ inches (11.4 cm) of rain fell over a two-day period, but that did not dampen the spirits of the Jamboree participants (although Moraine State Park became known to all in attendance as “More rain” State Park).

1977 would mark the year where the OA would expand its role beyond handling functions other than an OA Service Corps. Prior to the jamboree in 1975, it was announced that both Chairman George Feil and National Chief Brad Haddock were named to the 1977 Jamboree Committee.

The Order also started to play a more significant role in the Jamboree behind the scenes. National Vice Chairman Carl Marchetti was appointed as Chairman of the Youth Staff Subcamp. National Chairman George Feil directed the Youth Staff Satellite, and National Executive Secretary William Downs served as Associate Director of the Youth Staff Subcamp. This subcamp was established for the first time to have one place for oversight and welfare for all youth staff (aged 16 to 20). Having these youth scattered throughout the Jamboree had led to problems in the past, and Marchetti and Downs made the first effort to provide consolidated oversight to the 600- 800 youth staff. No matter what their program assignment was on site, they would be housed, fed, and provided transportation, recreation, and other services by an OA led team. This practice would continue for Jamborees to come and eventually would be expanded to include increased leadership in more Jamboree areas provided by OA personnel.

The OA presented an exhibit in the National Exhibits area showcasing the Order. Among the items displayed were sample OA items, including the E. Urner Goodman Camping Award and the new OA back patch. A video promoting the 1977 NOAC was also presented.

The OA Service Corps, with 129 Arrowmen performed a multitude of duties. Jobs included things such as setting up tents (over 500), hosting special guests, serving as ushers, participating in the opening and closing flag ceremonies, assembling props for the Jamboree shows, assembling bicycles for staff use (over 200), providing arrival and departure information to the troops, providing traffic directions and parking information, interviewing Scouts for the Jamboree Journal’s “Inquiring Reporter” and much more. Many of the jobs came in as requests for specific tasks – about 75 to 100 new requests each day.

A special “OA Meeting” was held, with over 2,500 Arrowmen in attendance that included an appearance by OA Co-Founder, Col. Carroll A. Edson. Other highlights were a preview of the 1977 NOAC and the singing of the conference song “A Thing of the Spirit” and the presentation of the OA Distinguished Service Award to Chief Scout Executive Harvey L. Price by National OA Committee Chairman George Feil.