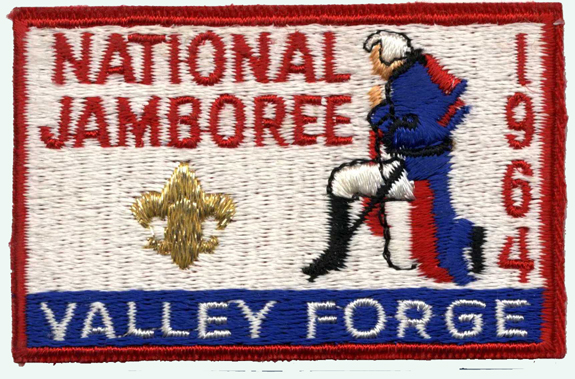 The 1964 National Jamboree was held at Valley Forge, Pennsylvania, from July 17 to 23 with the theme “Strengthen America’s Heritage”. 50,960 Scouts and Explorers participated in the Jamboree.

The opening show included over 6,000 actors, a 1,500-voice chorus and opening words from Lady Baden-Powell. President Lyndon B. Johnson challenged everyone to “remain true to the principles of Scouting”. American Heritage day was observed on July 18th with a number of special activities including each troop raising a thirteen-star American flag. It served to reinforce the strengthening of America through reverent, resolute and responsible patriotism. Each jamboree troop demonstrated fellowship and camping skills by participating in sectional and Jamboree-wide activities ranging from daily camp activities, skill-o-rama demonstrations, field sports events, an obstacle course, competitive Scoutcraft activities, camp fires, spectacular arena shows and the Jamboree Adventure Award.

Approximately 200 Arrowmen served to support the jamboree. Two regular OA service troops were provided to assist the Jamboree and another service troop provided work in conservation areas. Additional Arrowmen served in the protection service troop (along with Alpha Phi Omega members) as part of the traffic control inspectors group. Arrowmen were selected (one from each service area) and were approved by the National OA Committee. Cost was free, other than the cost of transportation to the event, and each participant was provided one free uniform.

During the Jamboree, 15,000 Arrowmen attended a giant OA Pow Wow and heard Founder E. Urner Goodman and Chief Scout Executive and former National Chief Joe Brunton speak. The program also included the use of a band, an Indian opening ceremony, and featured lodge chiefs on-stage during the meeting. The Pow Wow marked the launching of the OA’s 50th Anniversary celebration that would be concluded at the 1965 NOAC. Dr. Goodman challenged Arrowmen to be brothers and to give even greater service in the future than in the past 50 years.