It would help bring together young people from various so-called stations, break down the barriers that society has foolishly placed upon them, and establish in their minds when they are young a finer kind of humanity, a real understanding that the important thing is the association of a human spirit.

The League of Woodcraft Indians was an American youth program, established by Ernest Thompson Seton. It was later renamed the "Woodcraft League of America". The program was also utilized overseas, and many of these overseas programs still exist today.

In the United States, the first Woodcraft "Tribe" was established in 1902 at Cos Cob, Connecticut. Seton's property had been vandalized several times by a group of boys from the local school. Seton thought over his options and decided that sugar might be better than vinegar. So he invited the boys over to his property for a weekend. Surprised and a little apprehensive the boys came. Seton, the great storyteller that he was, regaled the boys stories about Native Americans and nature.

The result of his weekend was a group of boys who became interested in nature and Native American customs and traditions. The unique feature of his program was that the boys elected their own leaders: a "Chief," a "Second Chief", a "Keeper of the Tally" and a "Keeper of the Wampum."

Encouraged by the boys’ response and a dream of broadening his program to other communities, Seton wrote a series of seven articles for Ladies' Home Journal from May to November 1902 under the heading "Seton's Boys." Those articles later were published under the name Birch Bark Roll. 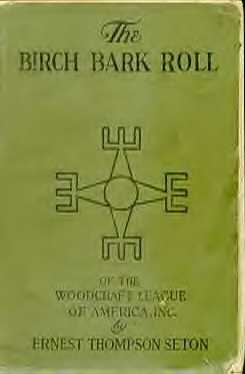 Looking for people interested in his outdoor organization. Seton traveled to England in 1906 to meet with Lord Robert Baden-Powell. He gave Baden-Powell a copy of the Birch Bark Roll. Seton and Baden-Powell bonded around the concept of a program for youth. In 1908, Seton received a letter from Baden-Powell stating that he was going ahead with his vision for Scouting, using as a base Seton’s program. Baden-Powell wrote Scouting for Boys and incorporated many of Seton’s ideas, honors and games into his book.