The first example of anything resembling a sash worn by recipients of the Third Degree (Vigil Honor) is a fraternal “bib” type three-part sash. These sashes can be observed around the necks of founders E. Urner Goodman and Carroll A. Edson in the photograph taken at the Rededication Ceremony held at Camp Biddle in conjunction with the first Grand Lodge Meeting in 1921. Other than the photograph itself, there is no other evidence, documentation or even confirmation that these are indeed Third Degree sashes.

The first Third Degree band that was worn o 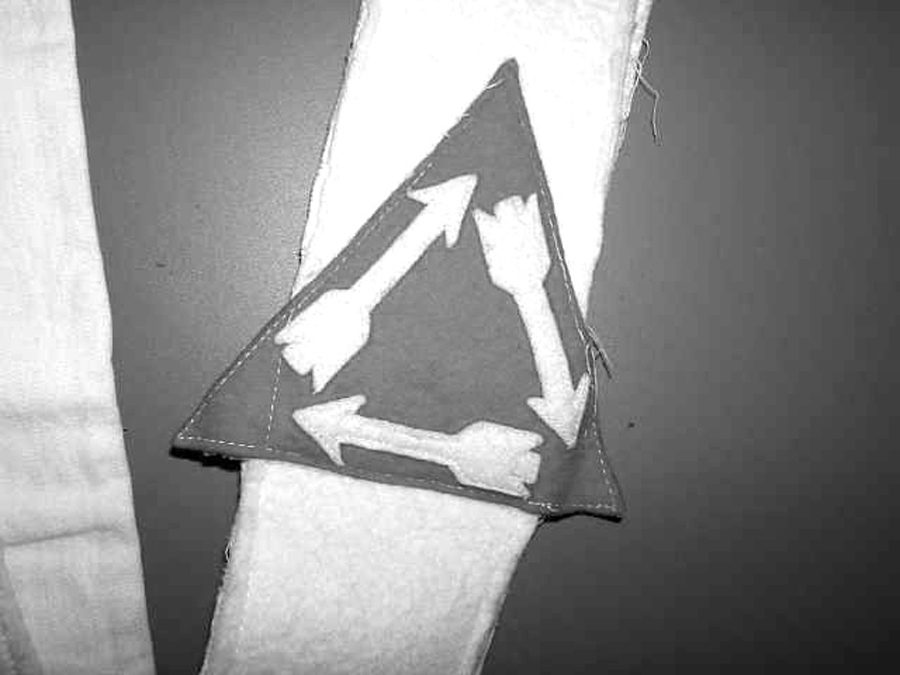 ver the left shoulder appeared in 1922. In a letter, dated August 1, 1922 on Philadelphia Council stationery, Horace P. Kern encouraged the 14 Third Degree members to purchase their own Third Degree band for one dollar and twenty-five cents each. Kern signed the letter as Secretary Third Degree.

The 1922 band was made out of white wool-felt and was backed by a linen cloth. The wool-felt and the linen were stitched together with a single line of stitching on both edges. There was no red arrow on the sash as was on the First Degree / Second Degree (Ordeal/Brotherhood) band. However, there was an oversized 4-inch equilateral red wool-felt triangle stitched onto the upper front of the band. Stitched to each side of the triangle was a small white wool-felt arrow. The direction of the small arrows was clockwise. These small arrows were designed with the shaft of the arrow extending past the end of the fletching.

Edward Pilkington received the Third Degree in 1924 and his Third Degree band was exactly the same as described above except the small arrows on the triangle were counterclockwise; a second variation of the first band.

Variation three of this first Third Degree band appeared circa 1926-27. The small arrows no longer had an extension past the fletching and they were clockwise in direction. Collectively, these sashes are known as “No Arrow” Vigil Honor sashes.

In 1927 Goodman left Philadelphia to become Scout Executive for the Chicago Council. The regional meeting of the Grand Lodge in Chicago for Region Seven introduced a new design for the Third Degree band. The material was white twill cloth with a bias edging. There was an Ordeal/Brotherhood red linen arrow on the sash and the Third Degree triangle was sewn onto the band over the red arrow on the front. The triangle was white twill and the small arrows were embroidered in beige or red (It is presumed the color on this embroidery was not colorfast) in a clockwise direction. This band was worn throughout Region Seven and other regions that surrounded Chicago.

In 1933, at the Grand Lodge meeting in Chicago, the minutes reflected a decision that all Third Degree bands would,

consist of a Brotherhood band to be worn over the left shoulder and to have a red triangle with three white arrows pointed clockwise superimposed upon it.

A sash already existed that met this description and was in use by the Region Two Grand Lodge. In the group photograph of the 1933 Grand Lodge Meeting all three types of Vigil Honor sashes can be observed in simultaneous usage as well as at least two additional variations for a total of five different Vigil Honor sashes.

Following the 1933 Grand Lodge Meeting, the Grand Lodge issued a new Third Degree band made of wool-felt and backed with linen material that would meet the new standard. To achieve uniformity, in a National Bulletin from the Chief dated February 1937, all members were told that only the band described in the 1933 Grand Lodge meeting minutes would be allowed to be worn at Order of the Arrow functions.

From 1937 until 1948, the Vigil Honor sash remained the same in appearance. However, the linen backing disappeared in the late 30’s and early 40’s. The felt small arrows on the triangle were changed from felt to chain-stitched embroidery and later to silkscreen. Also the direction of the arrows was inconsistent between clockwise and counterclockwise.

In 1948 the red arrow was changed from felt to flocked silk-screening onto the wool-felt. The Vigil Honor triangle remained oversized and the small white arrows came both silkscreened and flocked. Flocking is a silk-screen process where crushed felt is added to the ink and an electro-static charge is used to make the little felt pieces stand on end creating a printing that looked like velvet.

Circa 1951, in a cost saving decision, the Vigil Honor sash was simplified by flocking the entire sash, both arrow and the triangle, in one process. The Vigil Honor triangle became much smaller and was contained within the edges of the sash for the first time.

In 1955 the Vigil Honor sashes no longer came on felt. Henceforth they would be on twill material with red embroidered arrow and triangle. The sash was two plies of material stitched together on the edges by a double line of stitching.

From 1981 to 1987, the Vigil Honor sash changed from the rolled border to a chain stitch along the edge.

From 1988 to 1990, the Vigil Honor sash had two plies of material stitched together with one row of stitches and the red arrow and triangle with small white arrows were made as an appliqué and hot ironed onto the twill material. This concept did not work well. The appliqué would not hold when washed and these sashes peeled apart. They were not well received and quickly discarded (and as a result became something of a collectors item).

Since 1955, the Vigil Honor sash has had minor changes in construction, but the design has remained the same except for the inconsistency between clockwise and counterclockwise placement of the small white arrows on the Vigil Honor triangle.