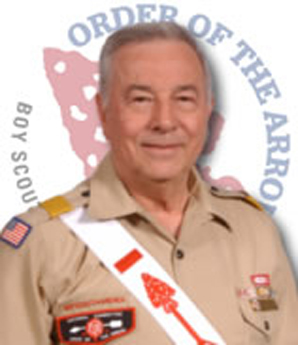 Tom McBride announced his intention to retire as the National OA Committee Chairman at the 1984 National Council Meeting. He stated that he was retiring because of his concern that new ideas and new leadership are critical for the continued success of the Order

National Boy Scout Committee Chairman Ted L. Johnson appointed Dr. Carl M. Marchetti to lead the way. Marchetti was a former vice chairman, and he stepped into the role of chairman on October 1, 1984.

Marchetti was born in June 1934 in Hoboken, New Jersey. Marchetti joined Scouting at age nine as a Cub Scout. He worked at a summer camp in Union City, New Jersey when he was selected as one of the first few charter members of Chinchewunska Lodge in 1949 at the age of 15. He sealed his membership in the Brotherhood a year later. He is an Eagle Scout and also earned the Explorer Silver Award. He was the first Vigil Honor member of Chinchewunska Lodge, which he had served as lodge chief for three years and area chief for 1956. Dr. Marchetti was appointed as the youngest member of the National OA Committee in 1962.