Planning started for a National OA web site in March of 1997. During the 1997 National Jamboree the first web team staff was recruited. The National OA Committee approved a budget in September of 1997 and the first pages went online in November. The site was officially launched in the National Bulletin at the beginning of 1998. The web site immediately started archiving pdf’s of National Bulletins. The primary purpose for the new web site was to have an online way to interface with lodges, participants and staff members for the upcoming 1998 NOAC. 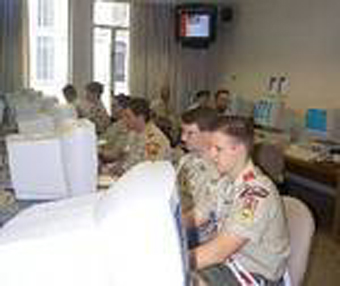 Once the Conference began, the web site became a way to communicate with NOAC attendees with online capabilities, something that was relatively rare in 1998, and also to provide a look at the conference for Arrowmen back home. During the 1998 NOAC the web site went “live” providing hundreds of pages and images from the NOAC.

The web site was a new tradition that was an immediate success. An image of the OA Web-Team working during the conference was posted on the website. Because most Arrowmen were using a dial-up connection in 1998 only small images of poor quality were used on the site, as the original images attests. As it was, it could take over a minute to download a page.

On August 5, 1998, at the conclusion of the NOAC, as part of the 1998 Strategic Plan of the OA to expand its presence on the Internet, the OA announced that the NOAC web site would convert to the Official OA Web Site. The initial colors were red and white. The site went through several minor changes and then in 2001 presented an updated look, with a “more calm” blue appearance.

In December 2013 the OA Web Site went through another complete overhaul presenting a contemporary updated interface for guests and a return to the traditional red and (off) white colors.

WWW.OA-BSA.org would become the primary method of communication between national and its lodges and members. The OA was preparing for the 21st century and the digital age.