A topic of great consternation in the 1960s and 70s was the matter of “restrictions” on OA badges. The term “restriction” references limits placed on Arrowmen regarding their ownership and usage of OA patches.

In the early years restrictions did not apply. The first insignia were pins and they were generally made of gold or silver. Because of the cost of the insignia no one was interested in trading them and there was no need to have duplicates. These items were constructively restricted to one per lifetime, no trade. However, starting in the 1930s trading badges as fellowship became an increasingly popular activity at OA gatherings.

Some lodges wanted to restrict their insignia to only their members. These restrictions took various forms. Lodges like Kepayshowink Lodge of Saginaw, Michigan, restricted their badges by placing a “no trade” restriction on them. That meant an Arrowman outside of the lodge had to convince a fellow Arrowman to break their trust with their lodge in order to obtain a flap from him. There were many types of restrictions. Walika Lodge of Van Nuys, California restricted their flaps to one per OA advancement (creating a three flap maximum). In Topa Topa Lodge of Ventura California they had the same restriction with an additional flap available if a lodge member climbed Chief’s Peak. Other lodges restricted their flaps to one per year; one per 8 hours of service; two per lifetime, etc.

In general the highest restriction was “one per lifetime”. An early example of this was the first flap issued by Uncas Lodge of Norwich, Connecticut. When their flap was first issued in 1950 members received their one and only flap in a unique way. As candidates were being inducted during their Ordeal Honor ceremony, as they received their first OA handshake with their left hands they received their flap in their right han 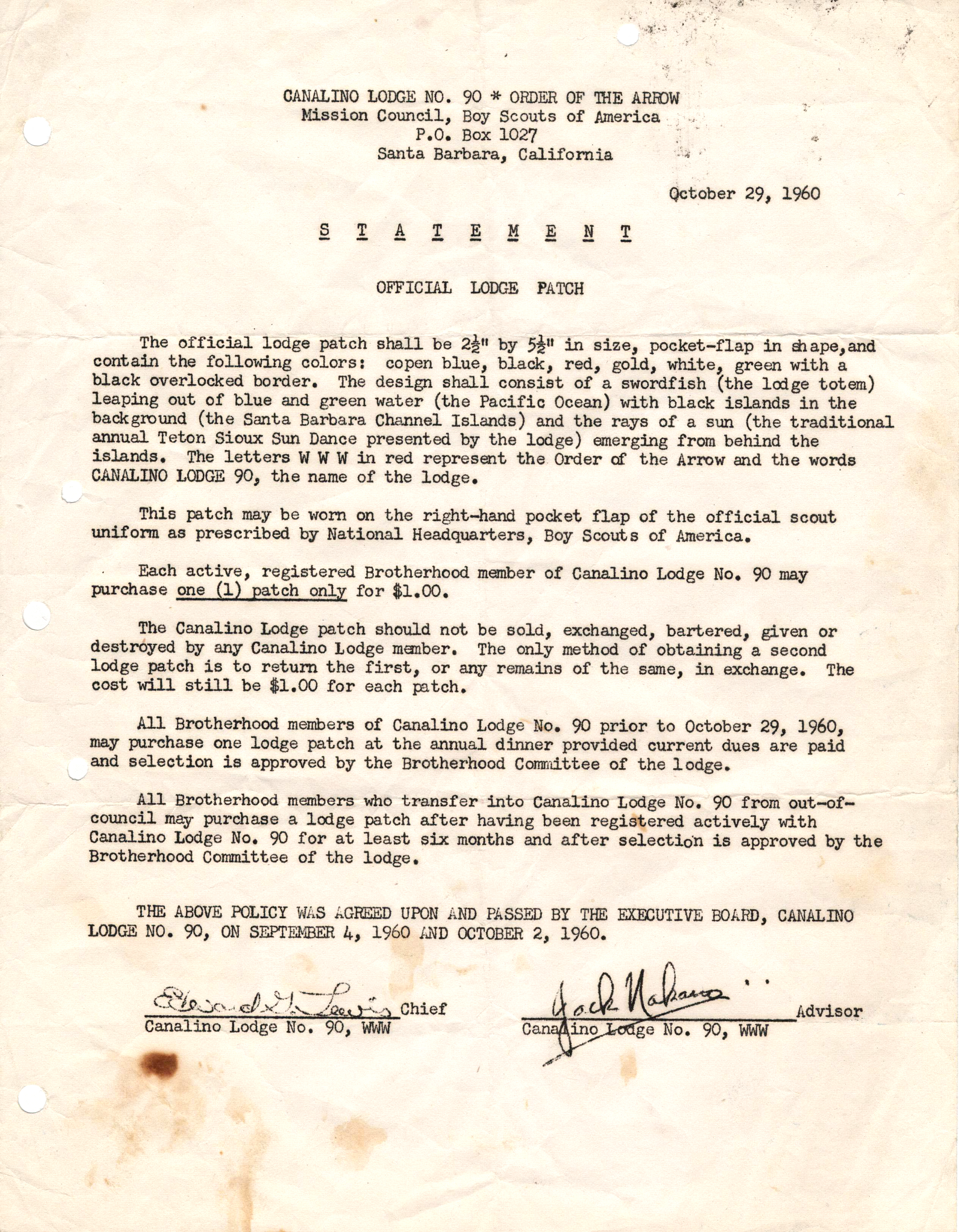 d with the following admonition,

This flap is like your right hand; you only get one of them in a lifetime.

The National OA Committee was not pleased with such imagery, equating an emblem of OA membership to a body part. 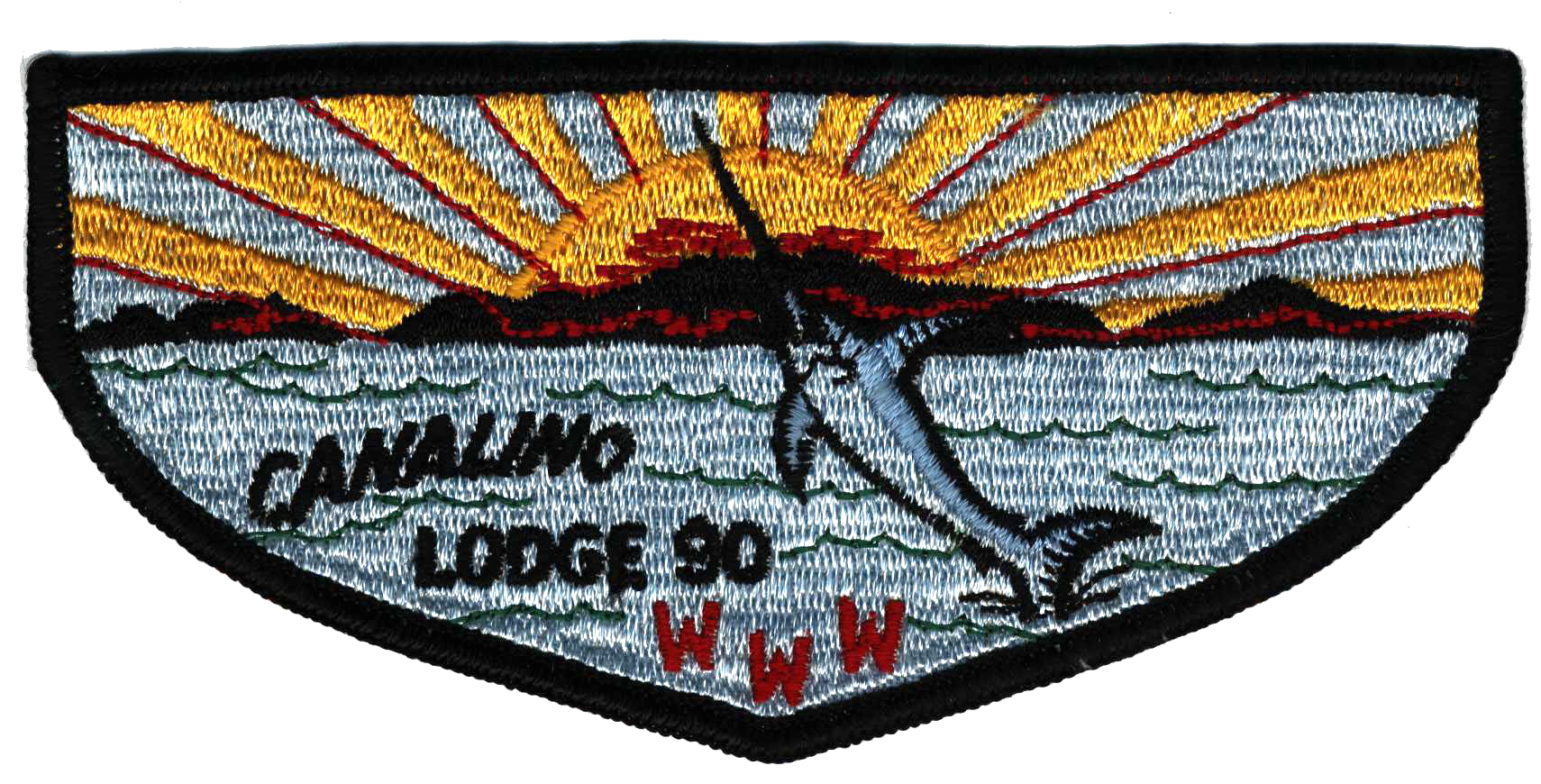 blems and tempers flared. At a NOAC in the 1950s the members of Blue Heron Lodge, Virginia Beach, Virginia touted their stunning diamond shaped badge on their lodge neckerchiefs and indicated that they had a “no trade” restriction. Stories circulated throughout the conference that one might be had for 50 badges. A group of “traders” pooled their flaps together and obtained an example. Then, this group ceremoniously burned the patch in front of the Blue Heron Lodge members to protest the restriction.

This was not brotherhood. It reflected poorly on patch trading and contributed to giving the hobby a bad name.

In 1960, Canaliño Lodge of Santa Barbara, California decided that they had to have the most restricted flap of all time. They placed a one per lifetime restriction on their badges and added two caveats. First, only Brotherhood Honor members could receive a flap and second, they had to agree to never trade or sell it. After at least one Canaliño Lodge flap traded hands the lodge serial numbered the back of the flaps and had each Scout pledge on their honor as a Scout that they would never trade or otherwise exchange their flap. Arrowmen in the lodge faced expulsion if they traded their patch away.

The National OA Committee felt that this was an inappropriate use of the Scout oath. It was being used to control members in a way never envisioned by the committee. Arrowmen in Canaliño Lodge would not bring their Scout shirts with their flap on it to Area and National Conferences out of fear of them being stolen.

Restrictions meant for many Scouts that they could not experience the common fellowship of a simple one for one trade with a handshake. In late 1975, led by National Chief Brad Haddock, the following statement appeared in the OA National Bulletin,

Within five years virtually all lodges ceased the practice of restricting their standard issue flaps. Limits still existed on contingent and award items, but the era of lodges only issuing restricted flaps was over.