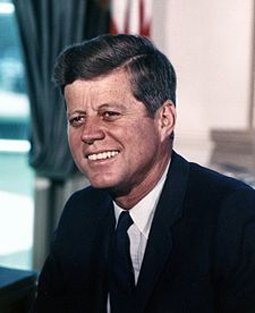 The 35th President of the United States was also the youngest U.S. President elected to office at age 43. John F. Kennedy was a former Naval Officer (Lieutenant) while serving in WWII. President Kennedy was a Boy Scout in Troop 2 of Bronxville, NY for two years. He also was active in the Boston Council from 1946-1955 as District Vice-Chairman, member of Executive Board, Council Vice-President, and National Council Representative. In 1961, as is the custom of presidents, he was the Honorary President of the Boy Scouts of America.