First Meeting of the Grand Lodge

In 1921 Wimachtendienk, W.W. (a common way at the time of referring to what we know as the Order of the Arrow) was ready to have a national structure. Patterned similar to the Freemasons, it was decided that each lodge would become a member of the Grand Lodge. On October 7 and 8, 1921, the first Grand Lodge Meeting hosted by the Philadelphia lodges, Unami and Unalachtigo was held in Philadelphia, Pennsylvania and at their Camp Biddle. These meetings would later become known as National Meetings and are the distant predecessors of today’s NOACs. The first meeting was attended by eight of the eleven known lodges. The use of the term “known” was deliberate in the meeting minutes. Our young Order had spread by word of mouth. In the early days of Scouting it was common for multiple councils/camps to share the same lake. For example, in upstate New York near Tuxedo Park there were more than thirty Scout camps around the Kanohwanke Lakes including council camps for Ranachqua Lodge and Pamrapaugh Lodge. It is still not known exactly which other lodges had formed in these early years, but clearly Goodman and Edson were aware that others had formed and they had no way to contact them. 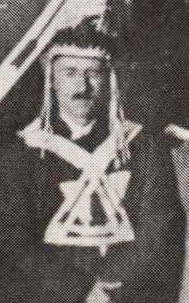 At the conclusion of the first day of the meeting the delegates traveled to Camp Biddle and held a re-dedication ceremony. The image of this ceremony is a significant historical photograph of our Order. In the image can be seen the founders in the original black robes with turtle totems. It is also the only known image that shows the three-part Third Degree (Vigil) bib sash.