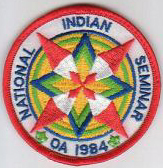 Instead of having just one National Indian Seminar in 1984, the National OA Committee made plans to hold three separate seminars at various sites around the country. Like their predecessors, the goal of these seminars was to improve the quality and authenticity of the Order’s Indian-related events and activities, and to provide Arrowmen with the necessary resources and training so that they could take this information back to their respective home lodges and sections.

The Order’s sponsoring of three seminars instead of the usual one served to provide opportunities for an increase in the number of participants & staff members, and to reduce transportation costs for all attendees. The Eastern Seminar was to be held at Camp Bud Schiele near Rutherfordton, North Carolina from August 5-11. Camp Wisdom in Duncanville, Texas was to be the site of the Central Seminar from August 12-18. The week of August 12-18 was also the scheduled date of the Western Seminar to be held at Camp Brinkley near Monroe, Washington.

The seminar’s cost was to be $125.00 per participant, and the fee not only included food and lodging, but expert instruction in Indian singing, dancing (i.e. fancy dance, traditional dance, straight dance, and Iroquois longhouse dance), craft work, Indian food and games, starting and running a dance team, Native American ethnology, and organizing and operating a ceremony team. Instruction was also to be given to participants on all of the main Indian groups of the United States, however it was understood by the seminar’s administrative staff that most Indian hobbyists have a special interest in one particular tribe or culture. To service those individual interests, the seminar would allot time so that participants were able to concentrate on whatever special area of our Native American history they desired.

Unfortunately the National OA Committee plans to conduct three separate National Indian Seminars during the summer of 1984 was not to be. Insufficient registration forced the cancellation of the Western and Central seminar events. Ultimately, only the Eastern Seminar was held at Camp Bud Schiele near Rutherfordton, North Carolina from August 5-11. Sixty-three Indian enthusiasts from lodges around the country, as well as 43 staffers participated in the weeklong event.

At the opening show, cultural coordinators made presentations on programs offered by their respective areas: Northern Plains, Southern Plains, and Northeastern Woodlands. Other seminar highlights throughout the week included: a show on the lifestyles of the plains/plateau areas; a panel discussion on hobbyists’ etiquette at pow wows; a discussion on National Order of the Arrow Conference (NOAC) dance competitions; and a dance team presentation by Arrowmen who had never danced prior to the seminar to demonstrate how anyone can learn to dance respectably in a short period of time. National Chief Bob Wade addressed the gathering of participants at the dance team presentation.

In addition to the aforementioned highlights, there was a camp-wide panel discussion concerning local and federal laws that pertain to protected animal species. The panel included attorney Ed deTorres, who spoke on the legal ramifications of this legislation, and Peter Flemming, who spoke to Arrowmen about his experiences with the U.S. Fish and Wildlife Service concerning the possession or trade of feathers and body parts of threatened, protected, and endangered species. The Order of the Arrow’s “Protected Feathers Clarification” policy (effective January 1976) was also discussed.

From a pilot program initiated by Maury Clancy in 1974 and subsequently perpetuated by Don Thom, Bill Downs, and Greg Guy, the National Indian Seminar series grew over a ten-year period of time to become one of the Order of the Arrow’s most successful training and education programs. The program brought to the Order a new found sense of respect and reverence for all things Native American.