In the early ceremonies and Wimachtendienk literature arrow sashes were called arrow bands. The original band is the black sash used in the 1915 ceremonies on Treasure Island. Harry Yoder describes it as a black band with a white vertical stripe on the front. George Chapman described presumably the same band as being black with a white vertical arrow on the front with the arrow pointing over the shoulder. This band is the first sash and none are known to exist. The material used to make the sash is often described as being the same material that was used in the making of the black academic type robes worn by Goodman and Edson for the first ceremony.

The circa 1918 Ritual for the Second Degree w 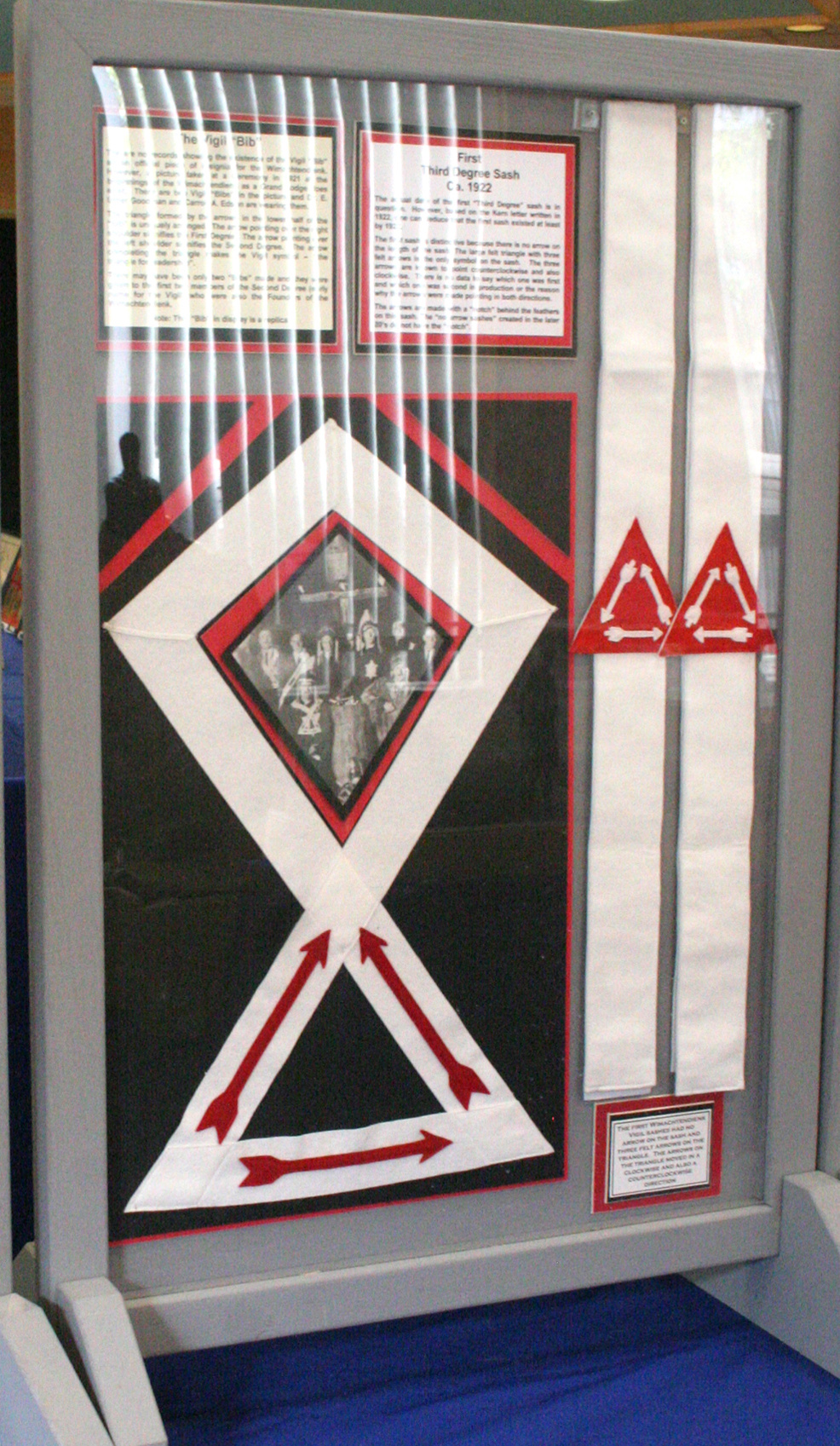 ritten by Dr. William Hinkle has a line in it that moves the band from the right shoulder to the left shoulder just before the conclusion of the ceremony. There is no description of the design, color or material. This is the earliest reference that the First Degree (Ordeal) band and the Second Degree band (Brotherhood) were the same sash, just worn over different shoulders.

The earliest known photograph depicting arrow bands being worn is a Treasure Island council fire picture dated to 1919. Bands are shown on both the left shoulders and right shoulders of Arrowmen. Because the picture is in black and white, the color of the band appears white, but the color of the arrow cannot be confirmed. This is because the value of the color red is the same as the value for black in black and white photography.

In the Camp Biddle Rededication Ceremony at the formation of the Grand Lodge in 1921, there is a famous picture that shows bands over both left and right shoulders and also pictures Goodman and Edson with a sash in the shape of a triangle on the chest and shaped like a “fraternal bib”. The photograph is black and white so color determination is inconclusive. However, the photo does document the Third Degree bib-type sash.

The early Wimachtendienk Constitution and By-Laws and the minutes of the Grand Lodge meeting in the early 1920s do not define the band. It is mentioned that it is available for purchase and that they were provided to the new lodges accepted in the Grand Lodge, but there is no description of color or materials. 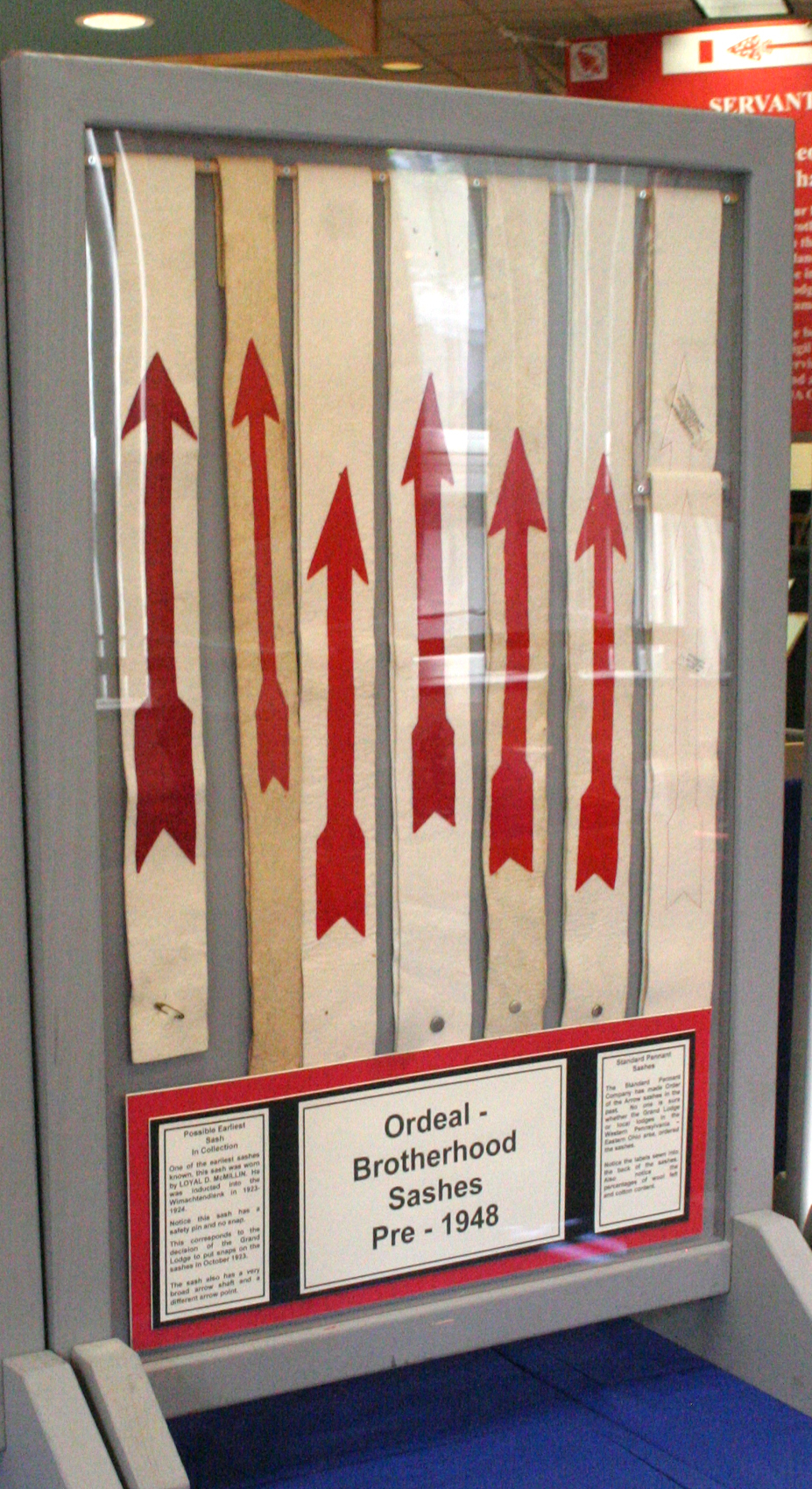 The sashes made by the Grand Lodge and its successors were all basically the same from 1921-1948. They were all white felt sashes with red felt arrows. The sizes and shapes of the band, arrow shaft, arrowhead and fletching varied through the years as they were constantly being re-ordered. The one exception was the bands made by the Region 7 and most prominently used by Owasippe Lodge, Chicago Council while Urner Goodman was the Scout Executive. Those bands were made out of a white twill cloth and the arrows were a red linen material sewn onto the cloth band. They were used from the late 1920s until the mid 1930s. 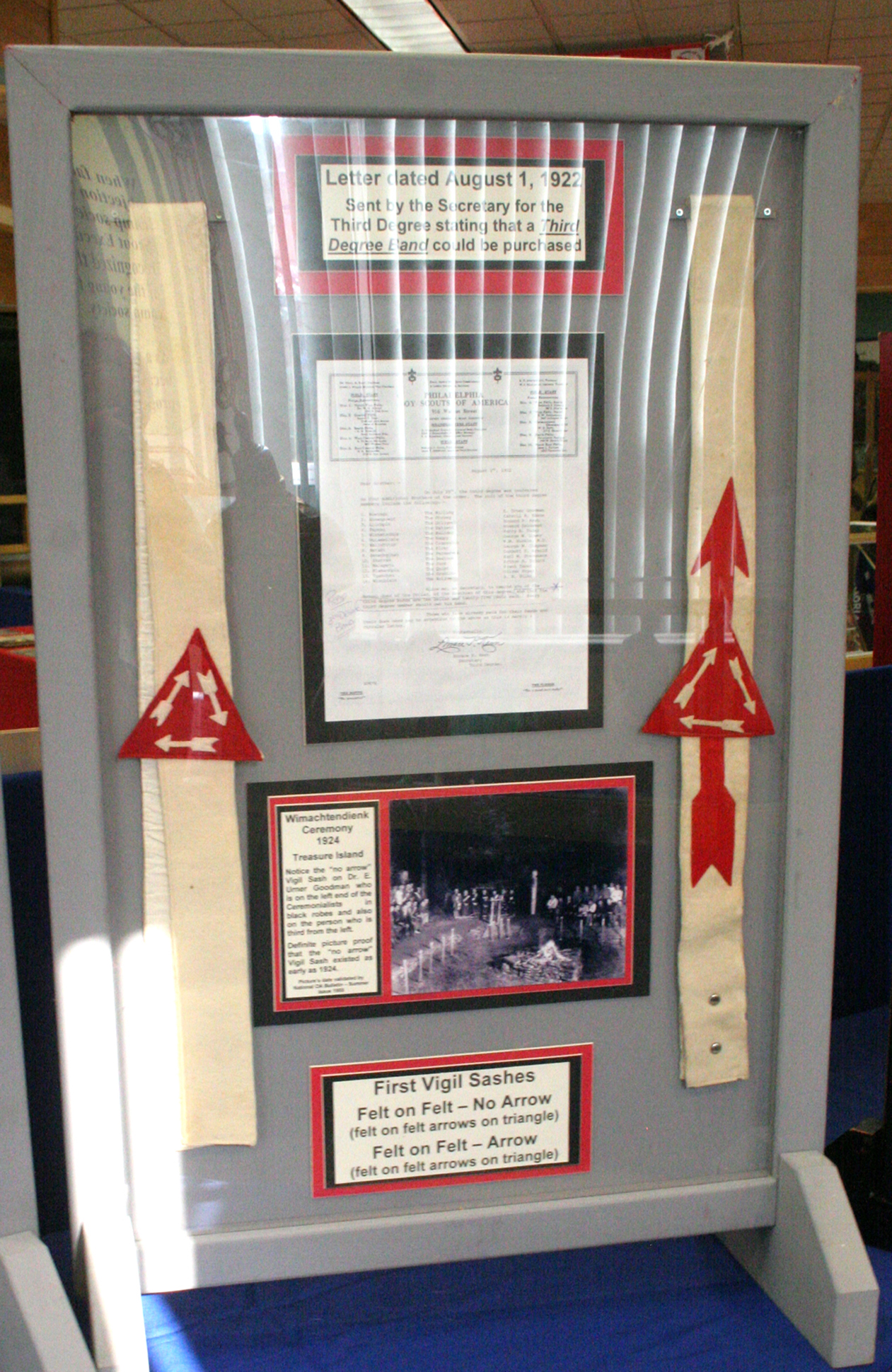 changed all sashes. The sash material remained the wool-felt. However the arrow was red-flocked silk-screening onto the wool-felt. Flocking is the process of silk-screening crushed felt with ink using an electro-static charge to make the felt stand-up creating a velvet like appearance. The Vigil Honor sash had a large red wool-felt triangle with the small arrows silkscreened onto it. The large triangle was sewn onto the Ordeal/Brotherhood band/sash. These large triangles exist with both flocked and non-flocked white arrows. 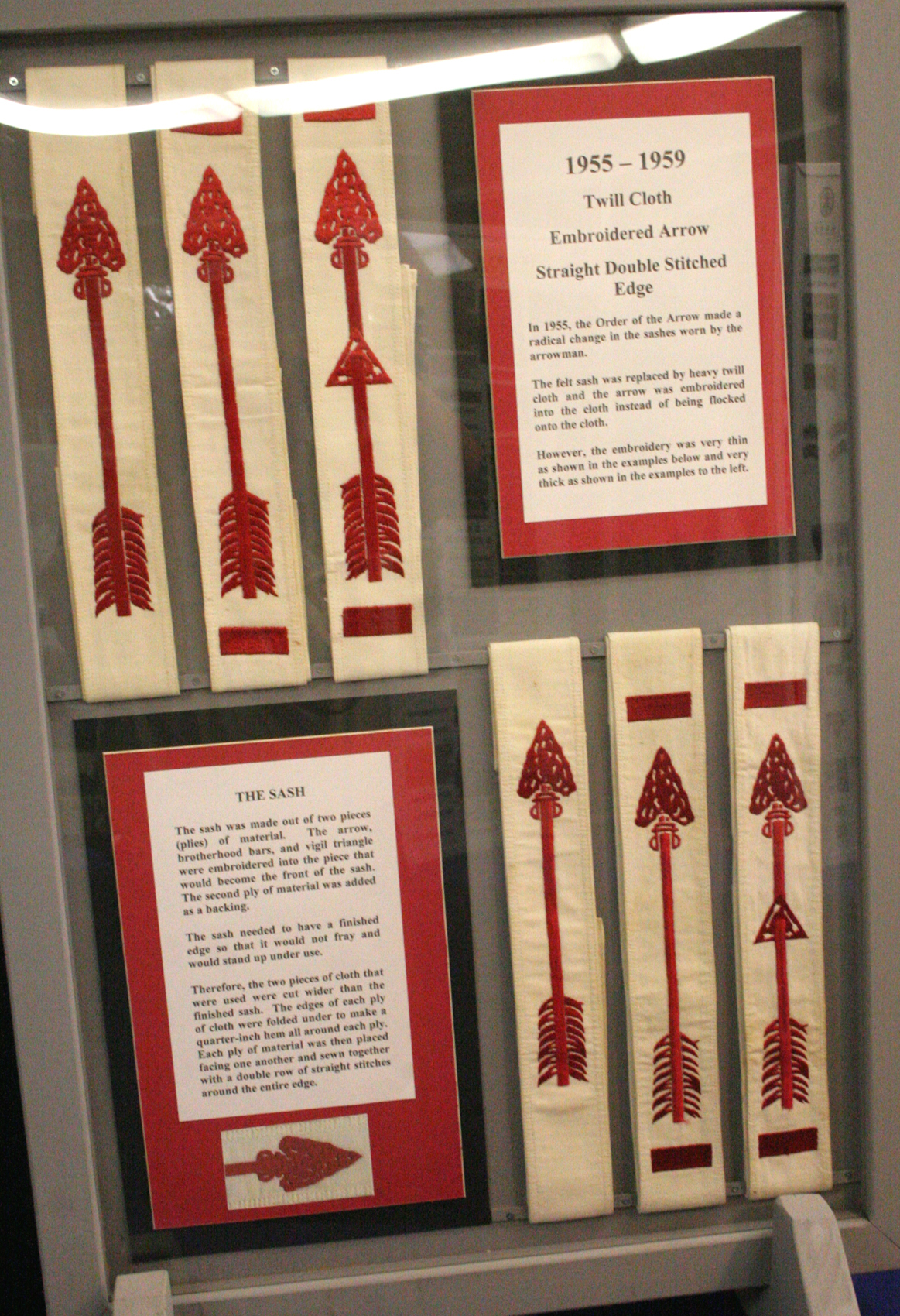 In 1955 a completely new sash was introduced. Gone were the wool-felt and silk-screening. The new sashes were twill material with embroidery. The sash was made out of two plies of material so that the embroidered red arrow did not show on the back. It also gave bulk to the sash. The plies were sewn together with a distinctive two-track stitch.

By 1960, the design changed slightly, the distinctive two-track stitch was replaced by a process of edging called a rolled edge or merrowed border stitch. This sash remained in use with minor variations until 1980.

In 1980, the sash edging changed again. This time the plies were chain stitched together. Again there were variations in the embroidery pattern. The arrows on the Vigil Honor triangle were manufactured both counterclockwise and clockwise. In 1988 the sash remained the two-ply twill cloth. The two plies were stitched together by a single line of stitching on the edge. The real change was that the arrow, the Brotherhood bars and the Vigil Honor arrow with triangle and small arrows were all appliqués hot ironed onto the sash. These “wash and peel” sashes were short-lived. The appliqués would not stay on the sash after the sash was washed and they were generally derided by membership as insufficient quality. The Vigil Honor had small arrows on the triangle and were clockwise. Because of the short period of usage of this sash it has become somewhat of a collectors item.

In 1990 the sashes again were embroidered on to white twill cloth. There were two plies of cloth. The two plies were stitched together with a single row of stitching. The small arrows on the Vigil Honor triangle went counterclockwise. This sash is the current Order of the Arrow sash.