Carroll A. Edson was born on December 29, 1891. He received his Bachelors of Science degree from Dartmouth College in 1914. In 1915 Philadelphia Council hired 23-year old Edson as a Field Commissioner (what we call a Field Executive today). Edson was subsequently appointed to serve as Assistant Camp Director in charge of commissary for the summer of 1915 at Treasure Island Scout Reservation. In this capacity he worked with E. Urner Goodman as they founded Wimachtendienk. While Goodman was known for his vision, Edson was known for his ability to get the job done. Edson served as one of the two ceremonialists in the first Wimachtendienk initiations in 1915. Edson took an active role in developing Wimachtendienk that first summer. He worked with Goodman on the ceremony lines, initiation tests and Native American symbolism. Edson was actively involved in the formational meetings of the Order and he kept the second Vigil in 1917, his Vigil name was Ahowapowit, “The Strong”. 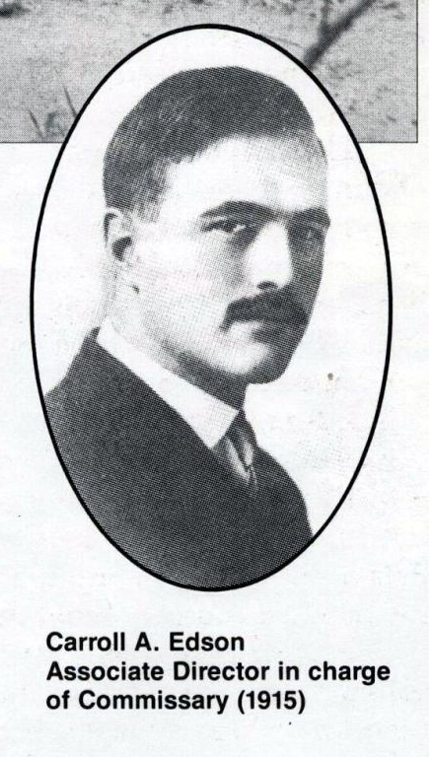 In 1921 Edson became a Field Executive for the South Shore District in Chicago Council. From that position he chartered and developed five separate lodges in Chicago. In 1921 Edson was called upon to be Chairman for the first Grand Lodge Meeting. However Edson lost to Goodman in the election for the first Grand Lodge Chieftain. Edson persevered and after losing for a second time for chief in 1922, he was elected the third Grand Lodge Chieftain in 1923.

In 1922, it was Edson, who along with Goodman rose to defend camp fraternities at the biennial Scout executive conference. It was Edson’s impassioned speech about how an organization such as the Order can serve the boy and the council that helped to carry the day and preserve the right of the Order to exist in the BSA.

In 1927 Edson accepted the Scout Executive position in Jersey City, New Jersey where he founded Achtu Lodge. Edson left Scouting around 1933. In 1940 Edson was one of the 11 inaugural Distinguished Service Award recipients. His DSA medal is placed on display at the NOAC museum each Conference.

In the early 1960s Edson became active again in the OA and was recognized as co-founder of the Order. A favorite keepsake for a generation of Arrowmen was to have their Order of the Arrow sash signed by the two founders. Edson remained active and a mainstay at NOACs and Jamborees until his death on October 25, 1986 at the age of 94.