1960 marked the 50th anniversary of the Boy Scouts of America. The fiftieth birthday of Scouting was an opportunity for all Scouts to join hands and show the nation and the world what Scouting had done, was doing and will do in the future. A number of key activities and events took place during the Golden Anniversary year to commemorate this significant milestone. 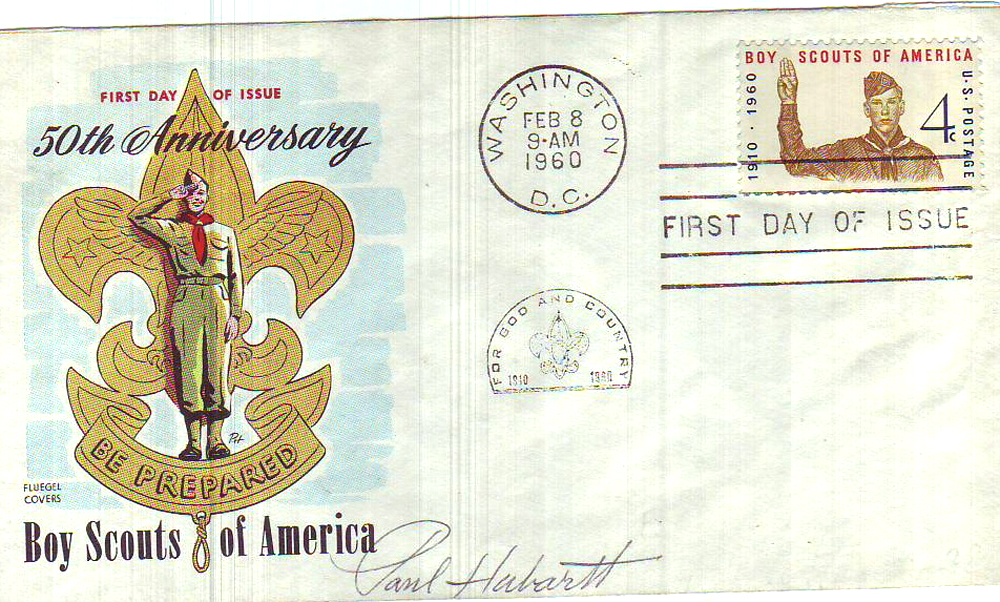 A golden anniversary commemorative postage stamp was issued to celebrate the Golden Jubilee of the Boy Scouts of America and this would be the only time that Norman Rockwell would do a painting specifically for a Boy Scout handbook cover. A special tribute to Scouting in Washington D.C. was held and in June, 1960 the new Johnston Historical Museum located in New Brunswick, New Jersey was dedicated. Scouts participated in the third nationwide Get-Out-the-Vote campaign, but the big event and recognition of this key milestone was the Fifth National Scout Jamboree that was held near Pikes Peak Mountain and Colorado Springs, Colorado where 53,378 Scouts and leaders attended.

During this anniversary year, those that could not attend the National Jamboree (the rest of the 5 million members of the Boy Scouts of America) participated in a number of local activities across the country to celebrate Scouting’s Golden Jubilee. Cub Scout jubilees and Explorer jubilee field day events were held. Boy Scouts and their leaders were active in showcasing Scouting by holding gigantic jubilee camporees, not in the back woods as was traditionally done, but in scores of public places such as downtown parks and town squares.

As stated by Chief Scout Executive (and 1922 Grand Lodge Chief), Arthur A. Schuck, “We are prepared. We are a youthful movement – fifty years young! We have grown strong through helping others, The best years are ahead.”