The 1993 National Scout Jamboree was held at Fort A.P. Hill, Virginia, from August 4 to 10 with the theme “Scouting . . . A Bridge to the Future”. 34,449 Scouts participated in the Jamboree and heard singer Louise Mandrell and again from Lee Greenwood and the popular “Up With People” group. 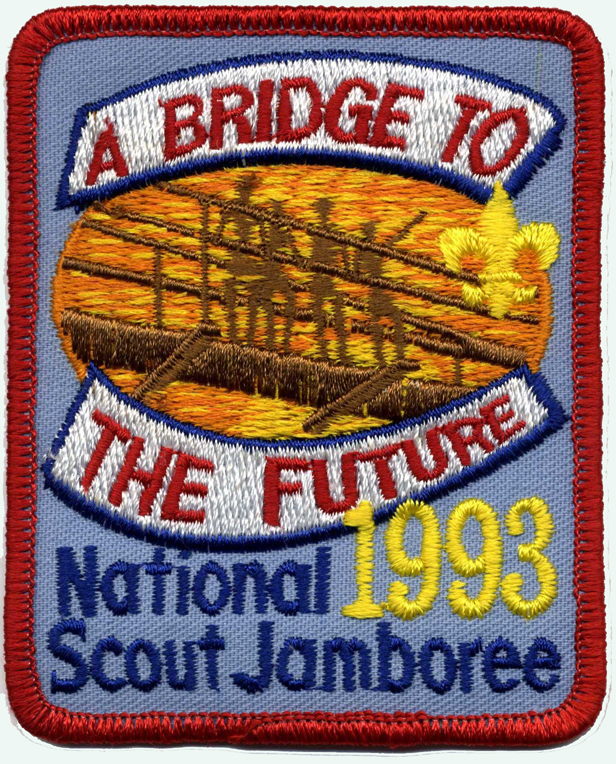 The OA continued to expand its service to the Jamboree with a number of support activities. Over 150 Arrowmen served at the Jamboree including 129 Arrowmen in the OA Service Corps. The service corps provided service for program areas, arena shows and logistical support during the Jamboree.

As in past years, a number of National OA Committee members provided valuable leadership to the Jamboree including leadership for the Youth Services Subcamp. The tradition of a special OA Jamboree rendezvous in the main arena to hear the latest OA news and for a rededication to Arrow work also continued with over 15,000 Arrowmen in attendance.

In addition, the OA created and operated it’s first “model campsite”, to demonstrate proper backcountry camping techniques (the predecessor to TOAP). It was set up entirely with official BSA camping and outdoor equipment to serve as an example for all Scouts and leaders of how to properly use the best equipment available.