The 1985 National Scout Jamboree was held at Fort A.P. Hill, Virginia, from July 24 to July 30 with the theme “The Spirit Lives On”. 32,615 Scouts participated in the Jamboree. 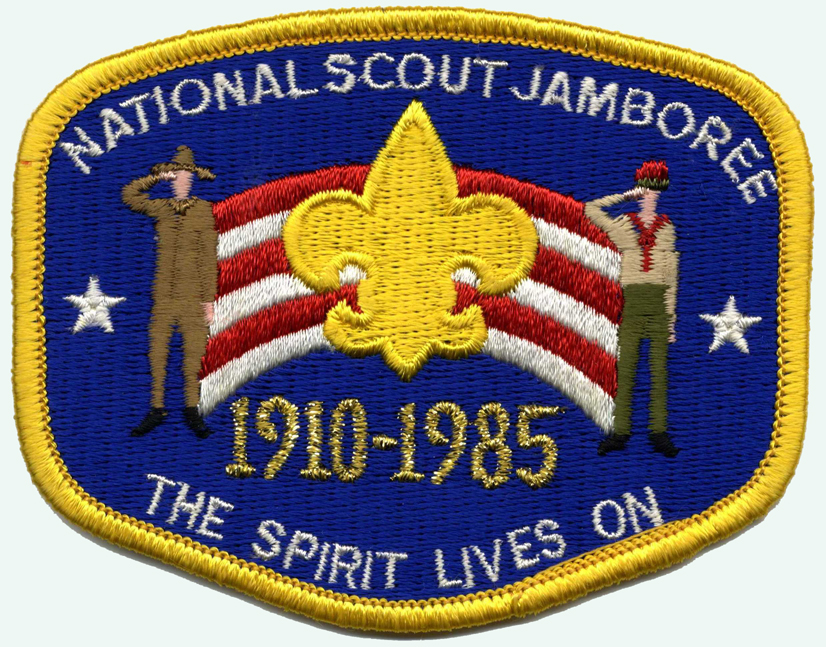 The OA was active at the Jamboree by providing leadership in a number of key areas for the Jamboree and also by providing direct support in providing a service corps consisting of 128 young Arrowmen and 10 adult advisers. National Vice Chairman Carl Marchetti served as Resource and Housing Chairman, Ken Davis as Youth services Chairman and National Executive Secretary Bill Downs as Youth Services Director. The Service Corps Arrowmen were divided into five troops and four additional adults provided administrative support.

The bulk of the service was general short-term projects. Major projects were: meeting and directing arriving busses to campsites, ushering at the two arena shows, and conducting the opening flag raising ceremony. Other projects included: billeting rained out Scouts in the aftermath of hurricane/tropical storm “Bob”, serving as aides and messengers at the main headquarters, assisting at various program areas, and delivering ice and publications to all of the sub camps. Ten youth Arrowmen from the corps also served as reporters for the Jamboree Journal.

Each OA service troop had two days free from duty so it’s members could participate in Jamboree activities. In addition, many other Arrowmen were on subcamp staff, trading post staff, program areas, the Jamboree band, and in their troops, all making a significant contribution to the Jamboree. The fee for youth service corps positions was $123, half the normal jamboree fee.