The 1953 National Jamboree was held at Irvine Ranch, California, from July 17 to 23 with the theme “Forward on Liberty’s Team.” 45,401 Scouts and Explorers were in attendance for the Jamboree.

Because the Jamboree was held close to Hollywood, many movie stars including Roy Rogers, James Stewart and Bob Hope were able to make appearances. President Dwight D. Eisenhower (and Vice President Richard Nixon, who stayed overnight and helped to prepare breakfast for his home town troop) also visited the Jamboree. 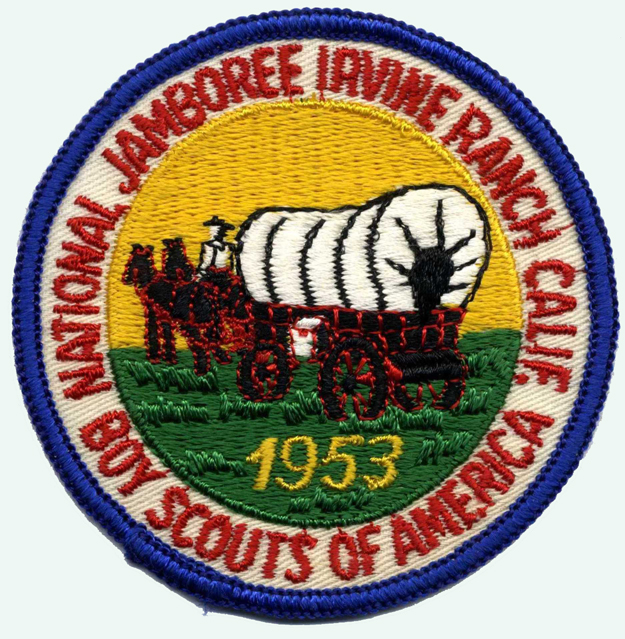 amboree participants were able to see and swim in the Pacific ocean (92,000 accident-free ocean swims), participate in Troop and Section campfires, a mammoth Scoutcraft demonstration, field sports and see a spectacular fireworks show. Special Achievement awards were introduced to teach and test Scouts in Scoutcraft skills.

The “watchwords”: “What’ve you got?” and “What’ll you give?” were common referring to the sport of “Swapping” of items, ranging from horned toads, to Florida sea shells, to Sequoia tree cones and even some patches.

Based on the success of the first OA service troop at the 1950 Jamboree, the OA again selected Arrowmen to serve at the Jamboree. A total of 18 Arrowmen were selected by Area Leaders and were approved by the Regional Offices. The service troop operating out of the Camp Headquarters provided guard service, served as orderlies and assisted in numerous projects related to the operation of the Jamboree. Members of the service troop also paid their own fees and expenses in the same manner as all other Scouts attending the Jamboree.

A special fellowship assembly was held just for Arrowmen where members met and heard from top national OA leaders, joined in singing of camp songs, and renewed friendships with other brothers from across the nation.