News You Can Use: New OA Triple Crown Requirements 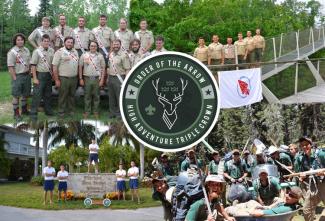 Excitement for Order of the Arrow High Adventure is at an all time high due to the new OA Summit Experience Program which commenced this summer. Through the addition of this fifth OAHA program, Arrowmen may be wondering how the OA Triple Crown Award can be earned in the future.

The OA Triple Crown has always recognized outstanding outdoorsmen who take the initiative to attend not one, but three high adventure bases through the Order of the Arrow’s programs. After attending an OA trek at Philmont, Northern Tier and Sea Base, these Arrowmen typically received a patch displaying a ship, a Indian in a canoe and Philmont’s Tooth of Time embossed over a red arrow. When the idea of a Triple Crown Award was conceived, plans for an additional program at the Summit Bechtel Reserve were not yet in the works. Therefore, the Order of the Arrow has worked to revamp the Triple Crown Award and its patch design!

Members seeking to achieve the new OA Triple Crown Award can complete any three of the five OAHA programs as long as they do so at three separate bases. These Arrowmen are also expected to give a presentation about their experiences at a lodge or section event encouraging others to participate. Afterwards, they should submit an OA Triple Crown Application which will be made available later this year. After verifying attendance, the Arrowmen will receive a patch set and a certificate signed by the national officers recognizing this accomplishment. The patch set will consist of a universal center patch surrounded by three "rockers" to signify the three programs completed.

Many Arrowmen are excited for this new program, including 2014 National Chief Nick Dannemiller. When asked what he thought on the new requirements Nick said, “The revitalization of the Triple Crown Award will not only help us kick off our newest OA High Adventure program, but also seek to better recognize Arrowmen who have enjoyed unforgettable experiences and given outstanding service to our national high adventure bases.”

The purpose of these programs is more than merely receiving another patch; these programs give Arrowmen the adventure of a lifetime and further instill the Order’s founding principles of brotherhood, cheerfulness and service into their daily lives. The new updated patch and certificate will be available beginning January 1st, 2015.