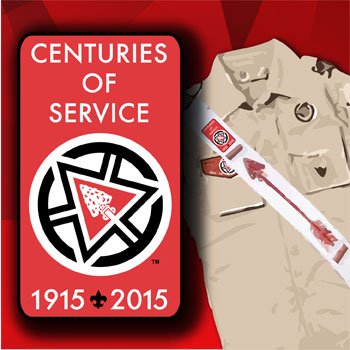 Starting today on the 99th anniversary of the Order of the Arrow’s founding, registered members in good standing with the BSA, their local council and their Order of the Arrow lodge will be able to commemorate our organization’s centennial by working to complete the Arrowman Service Award. This award, which some are referring to as “the sash patch,” will be recognized as one of the few patches that have ever been approved by the national Order of the Arrow committee to be worn on an OA sash.

The purpose of the Arrowman Service Award (ASA) is to encourage Arrowmen to recommit themselves to the ideals of the Order, increase their level of service to their local unit and council, and participate in the 100th anniversary celebration of the OA. The award will have three categories of criteria with various requirements that Arrowmen can complete. These include components on personal growth, service to Scouting, and participation in the centennial celebration.

Breakdown of the Three Categories

The category on personal growth will challenge both youth (OA members through age 20) and adult (OA members ages 21 and older) Arrowmen to advance their own leadership skills by participating in or staffing a BSA training course. In tandem with “recommitting themselves to the ideals of the Order,” this category also encourages each member to seal the bond of Brotherhood membership (if eligible), among other BSA advancement opportunities.

The category on Scout service advocates for Arrowmen to go above and beyond the traditional call to service and serve in a variety of leadership positions at the unit, council, lodge and national levels. This includes service benefiting the local community, the local BSA council or camp, or public lands such as a national forest or park.

Logistics and Process for Fulfilling the Award

Arrowmen can commence working on requirements on July 16th, 2014 and continue working towards its completion through December 31st , 2015. There is no limit to the number of ASAs given per lodge, as long as the lodge’s adviser and staff adviser/Scout Executive approve each candidate’s completed requirements.

For a self-paced assessment, Arrowmen can fill out a requirement card that will be available for download on oa-bsa.org. Additionally, after a lodge adviser has approved the completion of these requirements, he or she can submit an order form for patches to recognize those Arrowmen who have recommitted themselves to our three fundamental principles. Note that if ASA recipients attend the 2015 NOAC, they cannot wear the ASA “sash patch” on their centennial red sashes that conference participants and staff will receive to commemorate the 100th anniversary.

As Scouting’s national honor society, the OA thrives on the principles of brotherhood, cheerfulness, and service. Through our Obligation, it is imperative that we continue to “be unselfish in service and devotion to the welfare of others.” Together, through the completion of the ASA, Arrowmen can build an even stronger foundation for our organization’s commitment to service and propel the OA into the next century of service. All Arrowmen are encouraged to work towards the fulfillment of the ASA.

Please see the Arrowman Service Award FAQ page for a listing of common inquiries. Any other questions on the ASA can be directed to @email.