Are you a winner? Compete in the 100th anniversary identity contest to find out!

The Order of the Arrow is seeking input to develop the identity that will represent its 100 years of cheerful service. The designs for a 100th anniversary year-long logo, a NOAC 2015 patch, and 100th anniversary totem that will symbolize the legacies of the men and women of our Order lie awaiting in one of you. Search your heart and conscience for the essence of the Order of the Arrow.

While you look for inspiration, it will be helpful to consider examples from the past. The 75th anniversary of the Order was in 1990, and a similar contest was held to find the best image to represent seventy-five years of service to Scouting and the community. The turtle was selected as the totem and was integrated in the 1990 NOAC patch, which embodied both the past and present of the Order. The year-long logo pulled together the MGM Indian logo, the turtle totem, the numerals "75", and was widely used at all levels of the Order. The three pieces ended up complimenting each other well for the 75th; what will the identity of the 100th look like? 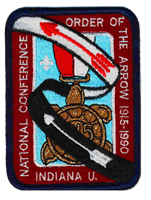 Some additional guidelines while considering your design include:

Take inspiration from the "Centuries of Service" thematic concept
Reflect on what the Order of the Arrow and the Boy Scouts of America have done to celebrate other large milestones
Create a NOAC 2015 patch that can be easily stitched
Think simple, clean, crisp
Integrate the three potentially unique pieces together

Submissions will be accepted no later than the end of October, so get out your pencils and colored pencils, or start up your computer drawing program and see what you can do! When you have produced something you like, send it on to oa100@oa-bsa.org; both youth and adults are welcome to submit their ideas. The Arrowman with the chosen submission will be recognized at the 2015 National Order of the Arrow Conference with an exclusive commemorative patch set capturing what he or she helped to create. As an added bonus, if the winning submission originates from a youth, his NOAC fee will be picked up by the National Committee and he will be invited to participate as a member of the 100th Anniversary Youth Advisory Committee.