The Order of the Arrow is streamlining our structure while preserving national youth leadership opportunities! The National OA Committee has voted to approve a final prototype from the Project Magellan task force that will maintain current section boundaries while transitioning to two regions:

After garnering nearly 300 ideas from Arrowmen nationwide, Gateway and Eastern will be the names of our new regions!

The new structure took effect on Dec. 28 as we elected our new region chiefs. 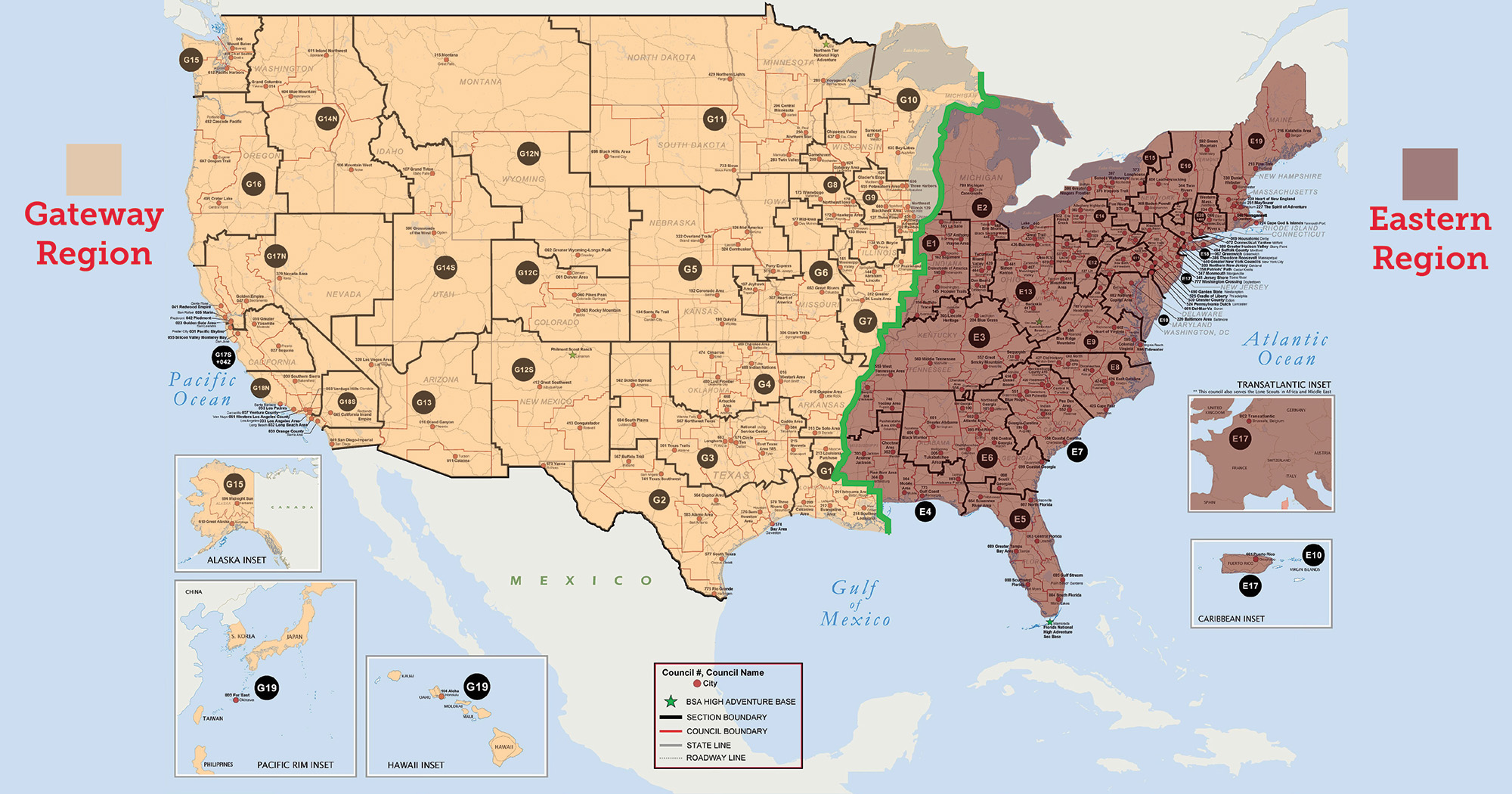 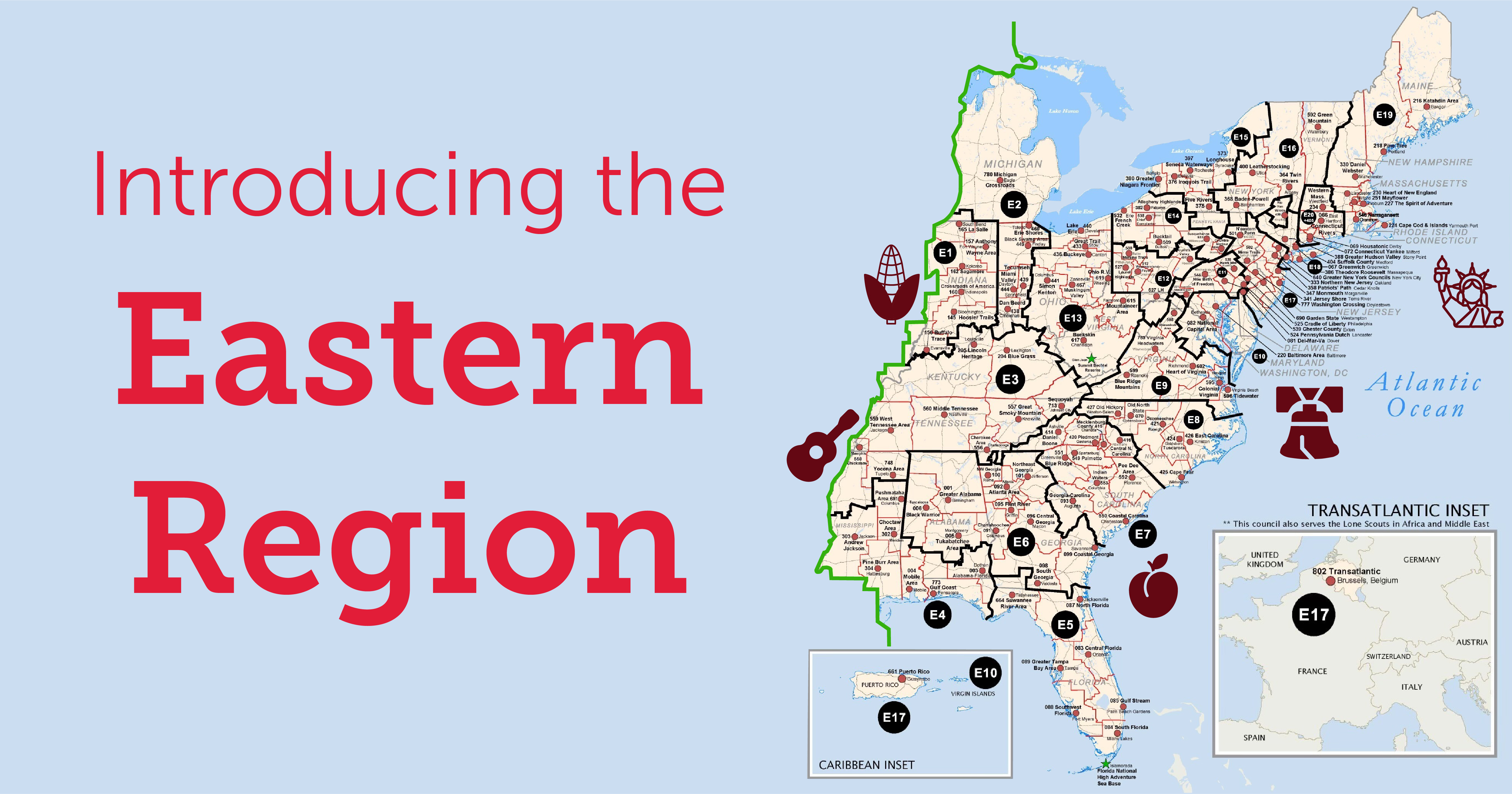 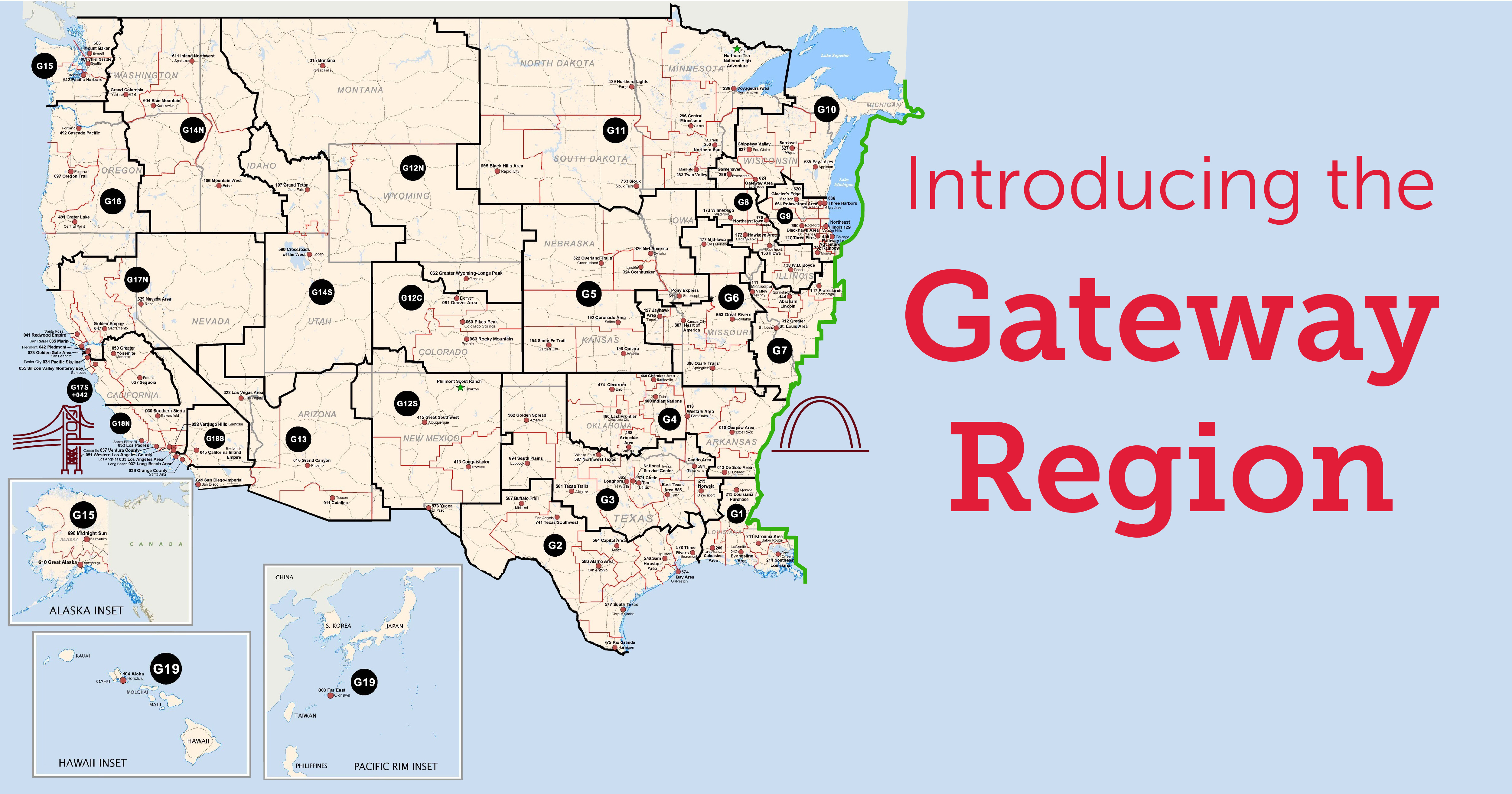 The Boy Scouts of America recently implemented a new structure, including the creation of 16 National Service Territories (NST). These NSTs replace the existing area and region structures which have been in place since 1990 (more information can be found here).

In December 2020, the National OA Committee Chairman, Mike Hoffman, created the Project Magellan task force. The group’s charge was to assess the impact of these changes on the OA’s operations, as well as, if deemed necessary, provide recommendations for how the Order might respond. The task force has worked throughout 2021, led by eight youth consisting of the 2020 & 2021 Region Chiefs, as well as seven members of the National OA Committee. Every lodge was invited to provide direct input and feedback through written surveys, one-on-one interviews, and regular reviews with OA youth and adult leaders around the country.

In early October, the National Order of the Arrow (“OA”) Committee adopted the organizational plan proposed by the Project Magellan task force. With this approval, the Order of the Arrow will move toward implementing changes to its national and regional structure which will be effective at the OA National Planning Meeting on December 28, 2021.

The approved prototype re-emphasizes the critical role of lodges, which remain the bedrock of our organization. Under the plan, the National OA Committee will develop additional resources to further support the work of chapters and newly recognized service areas.

Above the lodge level, the proposal maintains current section designations and boundaries and the current method for selecting national officers, while reducing the number of regions from four to two. In 2022 and beyond, the National OA Committee and national staff will monitor council and lodge mergers to adjust the composition and boundaries of OA sections as warranted.

The national leadership team is confident that this plan puts the OA on the path for organizational success. However, the National OA Committee will reevaluate the OA’s organization again in 18 months in anticipation of additional changes that may occur in the structure of the Boy Scouts of America and local councils during the coming years.

Is restructuring the OA necessary?

In life, change is a constant. It is common for lodges and chapters to realign their officer and chairman roles as needs and circumstances arise, and many councils shift their district’s borders as membership and other dynamics change. The Order is no different. With both a significant change in the last ten years to our membership and the current dynamics within the larger BSA, considering a restructuring was prudent. The Order wants to be best positioned to continue its purpose as an integral part of the Boy Scouts of America through positive youth leadership under the guidance of selected capable adults.

Did the OA implement the draft prototype presented at the NCOC?

The core tenets of the approved proposal are consistent with what the task force previewed this summer. The feedback many national, section, and lodge leaders provided in August during the National Council of Chiefs or subsequent national webinars was critical to finalizing the organizational structure approved the National OA Committee.

When will these changes be implemented?

Changes to the OA’s national and regional structures will be effective at the start of the 2021 National Planning Meeting in December and fully implemented in the year thereafter.

Why will the new structure be re-evaluated in 18-24 months?

What is certain today is that the future is uncertain. The BSA will continue to change in the months after the national organization emerges from bankruptcy, whether that be in council boundaries or in other ways. The Order needs to be highly responsive to those shifts, so it intends to keep a close eye on how things progress and prepare for a thorough evaluation in 18-24 months’ time.

What is going to happen to sections and regions?

Sections will continue to be utilized under a two region structure. Section names will be changed to fit within the naming of the Gateway and Eastern regions. You can find your new section name using the map and spreadsheet on this page.

How will my lodge or chapter be impacted by Project Magellan?

The intent is lodges and chapters are impacted positively. Scouting happens where the Scouts are, and that is in units within councils. Project Magellan seeks to focus the attention of the Order on strengthening the lodge within each council, especially as council mergers may occur more frequently.

Are there any changes to youth leadership roles in the OA?

Section leadership roles will be unaffected at least through 2022. Moving forward, there will continue to be a National Chief, National Vice Chief, as well as a Gateway Region Chief and Eastern Region Chief.

What if I have additional questions regarding Project Magellan?

If you have additional questions about Project Magellan please contact @email.